‘It’s no secret that we don’t agree with President Trump’s views on Brexit,’ says Tánaiste 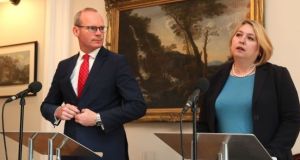 Tánaiste and Minister for Foreign Affairs Simon Coveney and the Northern Secretary Karen Bradley are holding talks with the North’s five main parties at Stormont on Thursday to determine if there is any chance of a political breakthrough in the coming weeks. File photograph: Brian Lawless/PA

Tánaiste Simon Coveney will not meet US president Donald Trump today as he is going to Northern Ireland “where there is real work to do”.

He will be participating in talks with representatives of the five main political parties in the North along with Northern Secretary Karen Bradley. “We want to get a deal before the marching season,” he said.

Mr Coveney told RTÉ Radio One’s Morning Ireland that President Michael D Higgins got “the mood of the Irish people quite well” in his comments about Mr Trump’s position on climate change.

When asked about Mr Higgins’s description of Mr Trump’s policy on climate change as “regressive and pernicious”, Mr Coveney said he thought the word regressive was a better adjective.

Taoiseach Leo Varadkar’s main focus during talks with Mr Trump will be on protecting Ireland’s interests and the peace process, he said.

“It’s no secret that we don’t agree with President Trump’s views on Brexit. The focus of the talk will be the impact of Brexit on Ireland. Successive US administrations have been supportive of the peace process.

“We will insist on protecting the peace process, we expect the US to support that.”

Mr Coveney acknowledged that many were dismayed at Mr Trump’s views on climate change.

He said he would not be surprised if the issue of Chinese company Huawei was discussed.

Huawei is used by many of the main telecoms operators in Ireland, and the company is expected to be involved in the roll-out of Ireland’s next-generation 5G network.

However, the Chinese company has been at the centre of deepening tensions between Washington and Beijing, amid concerns that Huawei’s technology could be used by China to spy on sensitive data.

Mr Coveney said: “We’ll keep an open mind. At the moment we have no reason to share his concerns.”

In relation to the talks in Belfast, he said: “We have some heavy lifting to do in the next two weeks”. He wanted to avoid “a summer of uncertainty”.