Conservative backbench Brexiteers claim nothing to fear from no-deal Brexit 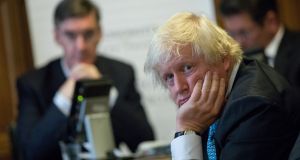 Jacob Rees-Mogg and Boris Johnson: set out the case for a no-deal Brexit, which they said would make the UK richer. Photograph: Chris Ratcliffe/Bloomberg

Boris Johnson has stepped up his criticism of Theresa May’s Brexit proposal, claiming that it would leave Britain in a worse position than if it were to remain in the European Union. The former foreign secretary said the Chequers proposal to align with EU regulations on goods would see Britain abandoning its seat around the table in Brussels and continuing to accept single market legislation.

“We will be exposing UK businesses, manufacturers, entrepreneurs, innovators to whatsoever rules the EU decides in the future to devise, even though those rules may well be inimical to the interests of UK innovation. That seems to me to be a particular economic risk in Chequers and makes it substantially worse than the status quo,” he said.

Mr Johnson was speaking at the launch of a report on the consequences of leaving the EU without a deal by the pro-Brexit Economists for Free Trade. Leading Conservative backbench Brexiteers, including former Brexit secretary David Davis, former Conservative leader Iain Duncan Smith and Jacob Rees-Mogg, endorsed the report’s conclusion that Britain had nothing to fear from a no-deal Brexit.

Chancellor Philip Hammond said later that the report was based on assumptions that were wildly out of line with those of other economic models. And Land Rover’s chief executive told a conference in Birmingham that “tens of thousands” of jobs in the car industry could be lost if Britain left the EU without a deal.

Mr Rees-Mogg said that, although he would vote against the Chequers plan if Ms May put it before parliament, the Fixed-Term Parliaments Act meant that such a vote would not be a vote of confidence in the government or the prime minister.

“We can vote down the bad Chequers proposals on Monday and support the government in a vote of confidence on Tuesday. They are clear, separate things. And trying to align them is, I think, a mistake. So we can carry on supporting the prime minister, but we can oppose this policy until it’s changed or collapses,” he said.

Mr Rees-Mogg said he favoured a Canada-style free trade deal over a no-deal Brexit, identifying the Border backstop as the only major obstacle in the way of securing such a commitment from the EU. Mr Rees-Mogg’s European Research Group (ERG) of backbench Brexiteers will publish a proposal for the backstop on Wednesday which he said “any reasonable person” could accept.

The plan is expected to centre on an “Inland Clearance” system that would see goods moving from Britain to Northern Ireland subject to spot checks at factories and at their destination. EU chief negotiator Michel Barnier has suggested that checks could be made at English and Scottish ports or on vessels crossing the Irish Sea from east to west. The EU would not seek to impose any checks on goods moving from Northern Ireland to the rest of the UK.

Downing Street on Tuesday dismissed the idea that EU officials could operate checks at British ports on goods destined for Northern Ireland, saying that the prime minister’s proposal would keep the Border open.