Carney to stay at helm of Bank of England until 2020

Concern over ‘turbulent period’ ahead for economy due to Brexit 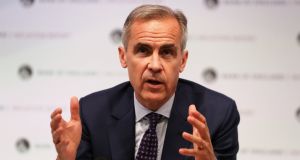 Mark Carney is to stay on as governor of the Bank of England.

UK chancellor Philip Hammond has announced that Mark Carney will continue as governor of the Bank of England until the end of January 2020 to help “support continuity in [the] economy” in the months after Britain leaves the European Union next year.

Speaking in parliament, Mr Hammond made it clear that he was worried that the months around Brexit could be difficult for the UK economy. The governor would stay longer, he said, “to ensure continuity during what could be quite a turbulent period for our economy in the early summer of 2019”.

The chancellor said Mr Carney would “support a smooth exit from the European Union and an effective transition to the next governor”.

Mr Hammond added that the appointment process of the next governor would take place next autumn, postponing the speculation surrounding the job until well after the scheduled date for Britain’s exit from the EU of March 29 next year.