Brexit deal could be agreed within next two months – Barnier 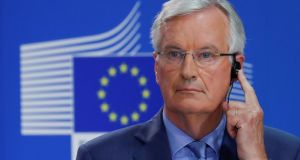 Michel Barnier: ‘If we are realistic, I want to reach an agreement on the first stage of the negotiation, which is the Brexit treaty, within six or eight weeks.’ Photograph: Yves Herman/Reuters

The European Union’s chief Brexit negotiator, Michel Barnier, has said it was realistic to believe a Brexit deal could be agreed between the UK and the EU within the next two months.

The pound jumped in value after he said during a visit to Bled in Slovenia on Monday: “If we are realistic, I want to reach an agreement on the first stage of the negotiation, which is the Brexit treaty, within six or eight weeks.

“The treaty is clear, we have two years to reach an agreement before they [the UK] leave. . .in March 2019.

“That means that taking into account the time necessary for the ratification process in the House of Commons on one side, the European parliament and the council on the other side, we must reach an agreement before the beginning of November. I think it is possible.”

EU leaders were expected to announce during a meeting in Salzburg, next week that an extraordinary Brexit summit would take place in November, as they give Mr Barnier extra encouragement to strike a deal with the British prime minister Theresa May.

Discussions on the state of play in the talks will take place over a two-hour lunch at an informal summit in Austria, at which leaders were likely to instruct the EU’s chief negotiator to work with the best of Mrs May’s Chequers proposals.

The EU27 would insist there needed to be resolution on the issue of avoiding a hard border on the island of Ireland by the time of a leaders’ summit in October in order for a deal to be possible.

However, the special summit – likely to be held on November 13th – would then allow EU heads of state and government to wrap up the terms of a political declaration on a future deal on trade, security, aviation and fisheries, among other issues.

EU officials and diplomats confirmed that such an announcement was expected although the plan was yet to be confirmed.

Spokesmen for the European council and European commission declined to comment.

A report in the Financial Times suggested supplementary guidelines – the formal documents produced by the leaders to instruct Mr Barnier – could also be under discussion in Salzburg.

If approved, they would then be adopted at the meeting in October, the paper said. The Financial Times quoted a senior EU diplomat as suggesting the new instructions would “serve as a sort of mandate to do the deal”.

Both EU and UK sources said the likelihood at this stage of such a formal move had been overblown.

Senior diplomats representing the member states in the negotiations said that while there would be warm words at Salzburg, there were no plans as yet to offer up a new set of guidelines to Mr Barnier, or for them to be discussed by the leaders.

EU sources noted that the heads of state and government had stuck with the same principles on the need to avoid “cherrypicking” from full EU membership since the start of the talks.

It was understood the EU instead wanted to highlight the need for movement on the Irish border issue, and the lack of time available, while giving Mrs May something to show for her efforts before the Conservative party conference.

By scheduling an extraordinary summit, one EU official said the message would be sent that time was too short to have everything in place by October, given the slow progress on the Irish border and other outstanding issues, such as geographical indications protecting food and drink products.

It would also indicate, however, the determination of EU leaders to take ownership of the final political declaration, sources said, which the EU insisted would be unprecedented in its range.

The British government was said to have been opposed to a November summit, fearing it would allow the negotiation timetable to slip.–Guardian