Bread in Ireland to get more expensive after no-deal Brexit

Bread, biscuits, cakes, confectionery and frozen pizzas to be hit by tariff on UK flour 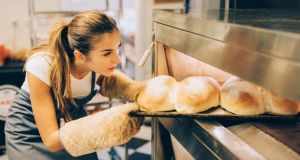 Price of bread: Ireland uses mostly UK flour, which will get more expensive in a no-deal Brexit. Photograph: iStock/Getty

The Irish loaf has emerged as an unlikely casualty of a no-deal Brexit, with prices set to rise by about 15c for an average sliced pan.

If the UK leaves the European Union without a deal, flour would be subject to a tariff of €172 a tonne, affecting the prices charged by commercial flour suppliers in Belfast.

The island of Ireland has just three flour mills, and the only two that can supply industrial quantities are in Northern Ireland. “We have two mills in Belfast, and 60 per cent of their output goes into the Republic of Ireland. Ireland doesn’t have any bulk commercial mill at all and imports the rest of its flour from the UK,” says Michael Bell of the Northern Ireland Food and Drink Association.

“We are not talking about there being no bread on the shelves, but that it is just going to be more expensive – and, depending on your income, that will be more or less significant,” says Alex Waugh of the National Association of British and Irish Millers.

In a no-deal scenario, EU tariffs will be applicable on a range of food items coming into Ireland from the UK. The tariffs on flour will hit bread, biscuits, cakes, confectionery and commercially produced frozen pizza that is assembled in factories outside Dublin but destined for the huge UK market.

For Irish bakers the choices are to absorb the cost, pass it on to the consumer or source flour in France, Germany or Lithuania.

“Can you source the flour in France? No,” says Bell. “Their mill structure is different, and their flour has a different protein content, which is good for baguettes but not for high-rise bread.”

Bakers have looked at getting flour farther afield, in Germany or Lithuania, says Waugh, but the cost of getting it back to Ireland added significant overheads and logistical challenges.

Currently, Ireland imports 150-170 28-tonne tankers of flour a week from the UK, with one-third from Northern Ireland and two-thirds from Britain.

Bakers south of the Border are looking at stockpiling flour, but that is not considered a sustainable solution.

“It is the thing that people often forget in this debate, that tariffs are a tax and they are a tax on consumers, because there just isn’t sufficient margin in the supply chain to fully absorb, so the costs will be passedon,” says Paul Kelly, director of Food Drink Ireland.

He sees a no-deal Brexit as a disastrous misapplication of tariffs, which are designed as a tool to protect European farmers and food production for social reasons. “The social contract operating here is that farmers have a high cost base because of the high cost of living in the EU [and because of the] high standards of regulation and safety that they have to adhere to,” he says.

Bell thinks the British government simply doesn’t consider food production seriously enough or understand that the supply chains on the two islands are so interconnected because of the efficiencies needed to keep prices down.

“Some supermarkets have said: ‘Tariffs are not our problem, it’s the suppliers’ problem.’ Suppliers are saying: ‘We beg to differ.’ They are saying they are not going to take it at all, which means suppliers will end up having to break contracts, because they won’t be able to supply at below cost.” – Guardian

Now is the time to give up smoking and vaping
7

Unable to work out? ‘Muscle memory’ may help you keep fit
10