UK retailer says may not be possible to mitigate ‘significant’ impact 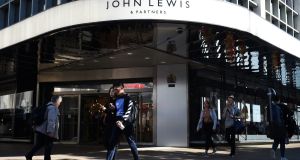 UK retailer John Lewis has issued a stark warning on the possible impact of a no-deal Brexit as the retail group reported a £25.9 million (€33 million) pretax loss before exceptionals for the first half of its financial year.

“Should the UK leave the EU without a deal, we expect the effect to be significant and it will not be possible to mitigate that impact,” the partnership’s chairman, Charlie Mayfield, said in a statement.

“We have ensured our financial resilience and taken steps to increase our foreign currency hedging, to build stock where that is sensible, and to improve customs readiness. However, Brexit continues to weigh on consumer sentiment at a crucial time for the sector as we enter the peak trading period.”

The first half is usually less profitable than the second for the employee-owned retail group, but the performance at department store chain John Lewis in particular was unusually weak, with same-store sales falling 2.3 per cent and an operating loss before exceptionals of £61.8 million. The loss last year was £19.3 million.

It attributed the decline to weaker demand for big-ticket home and electrical items, investment in marketing and IT and cost inflation – in particular employee costs – running ahead of sales growth.

The loss does not include exceptional income of £244 million, comprising mostly a credit following the closure of the group’s defined-benefit pension scheme. With the exceptional items, the partnership made a £185 million profit. – Copyright The Financial Times Limited 2019