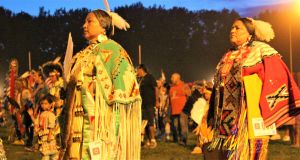 There was a time in the late 1980s, says Darla Black, when the safest place for her at night was locked in a prison cell. Her partner at the time was a violent drunk, and beat her and their small children regularly at their home on Pine Ridge Reservation in South Dakota.

Today, as vice-president of the 40,000-strong Oglala Sioux Tribe, about half of whom live on the reservation, she feels hers is a mission to fight for abused and missing indigenous women.

Dozens of women and girls have vanished, many presumed dead, in and around Pine Ridge since the 1970s. A poorly funded local police force and jurisdictional complications with the neighbouring off-reservation law enforcement departments have seen many cases slip through the cracks or been simply forgotten over the years.

Domestic abuse and physical violence remain prevalent. The most recent incident involving a local indigenous woman saw 21-year-old Esther Wolfe last month abducted in Rapid City by her ex-partner and his brother before being sexually assaulted and severely beaten on a Pine Ridge property.

Missing for nine days and apparently left for dead, Wolfe was eventually found at a hospital in Nebraska. The man accused of attacking her, Jesse Sierra, and his brother face life sentences in prison if convicted.

With a population of about 20,000 in an area equivalent in size to Cyprus, it takes almost 2½ hours to drive from one side of Pine Ridge to the other. Until last year, just 24 police officers patrolled its vast, stunning expanses, where many families live in trailers on isolated prairies.

“A part of the problem is slow law enforcement,” says Black. “I also believe that the drug trade and the human trafficking trade [fuel violence against women]. We are told that native, indigenous women are beautiful, and a lot of times they are targeted for that; they’re taken and sold.”

The suicide rate on the reservation is four times the national average, while alcohol and drug addiction have been at epidemic levels for years

She says Pine Ridge badly needs a shelter for victims of domestic violence and that she regularly receives phone calls from troubled women living in the eastern areas of the reservation. It’s not uncommon, Black says, to encounter women and children walking along reservation roads dragging suitcases having fled violence at home.

“Some of the younger ones, they’re reported as runaways and they [the police] don’t put any bulletin out on them,” says Black. “We want it that as soon as an indigenous woman goes missing, it’s dealt with as a missing persons case.”

A 2018 report by the Seattle-based Urban Indian Health Institute has attempted to highlight the extent of the violence facing indigenous women in the US. It found that in 2016, there were 5,712 cases of indigenous women and girls reported missing.

The US department of justice’s missing persons database, however, recorded only 116 cases. Data combining missing persons cases both on reservations and in US cities, where about 70 per cent of people from indigenous backgrounds live, is severely lacking, it claims. “(R)easons for the lack of quality data include underreporting, racial misclassifcation [sic], poor relationships between law enforcement and American Indian and Alaska Native communities, poor record-keeping protocols [and] institutional racism in the media,” the report found.

The Oglala Sioux Tribe Victim Services, run from a trailer in the centre of Pine Ridge village, has a list of more than 75 local indigenous women and girls who have disappeared or been murdered over the years. Some of the accompanying photographs depict teenage girls who have vanished in recent months and years; others show the faces of women missing since the 1970s.

A federal programme, the service employs five people who help victims with finding shelter or filing protection orders against their abusers. “Some of the women have nowhere else to go, so they end up going back to their abusive partner,” says Jenn Black Feather, the group’s domestic violence advocate.

Pine Ridge suffers from a litany of socio-economic ills. Within its boundaries lies Oglala Lakota county, the second poorest county in the US. The suicide rate on the reservation is four times the national average, while alcohol and drug addiction have been at epidemic levels for years.

Jobs are few and far between. A life expectancy of a little over 66 years, according to the Journal of the American Medical Association, is the lowest in the US, and lower than in Sudan or Iraq.

However, there are some bright spots. A new police chief has sought to increase the presence of law enforcement by more than doubling the number of officers working on the reservation. Many are new recruits who community leaders such as Black hope can be trained to better deal with domestic violence and the abuse of children.

An art show at the Red Cloud Heritage Center, a 15-minute drive north of Pine Ridge village, attracts about 10,000 visitors a year. The exhibition depicts modern and traditional indigenous art by dozens of artists from across the country, including about 30 from Pine Ridge. One artist, Molina Parker, has been featured in Vogue magazine for her stunning bead work.

“It’s really important for native artists to be represented in a field that you may not typically expect,” says Carmen Little Iron, a manager at the centre.

But it’s hard for locals to ignore the many broader problems, some from within the community, and some that are entirely beyond their control. Today, Black is most concerned with the expected construction of a “man camp” housing 1,400 workers close to the northeast and eastern edges of the reservation, where the proposed Keystone XL oil pipeline is to be built.

Construction work would result in many outside men coming into the rural area for the next two years which, she says, would put local women and girls in more danger.

Black wants cameras placed in public places in towns near where the camp is to be located. “That way,” she says, “we can monitor if our women are abducted.”