Shells and mortar fire exchanged between Hamas and Israel 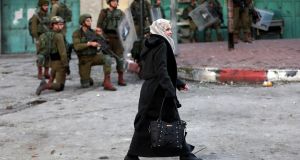 Israeli soldiers take position during a protest against the US “Deal of the Century” to tackle the conflict between Palestinians and Israel, near the West Bank City of Hebron. Photograph: Abed al Hashlamoun

An Israeli tank shelled a Hamas position in Gaza on Friday after three mortars were launched at Israel, as tensions continue following the release earlier this week of the United States’ Middle East peace plan.

The exchange marked the third consecutive day of cross-border clashes.

Relatively small-scale demonstrations took place in the West Bank, Gaza, in Jerusalem’s Old City and in Israeli Arab communities on Friday but so far the peace initiative, generally viewed as biased in favour of Israel, has failed to ignite passions on the Palestinian street.

The Israeli army reinforced its troops in the West Bank this week following situation assessments that were made after the “Deal of the Century” was presented.

Palestinian civil affairs minister Hussein al-Sheikh, who is in charge of contacts with Israel, said that the Palestinian Authority was no longer bound by the agreements with Israel. He told al-Jazeera that a PLO delegation would visit Gaza next week in order to consolidate a joint position.

Ahead of Sunday’s emergency meeting of Arab League states in Cairo to discuss the latest developments, he also criticised the lack of a unified Arab opposition to the Trump plan.

Jordan has come out against any move by Israel to unilaterally annex the Jordan Valley, which runs along the West Bank’s border with Jordan. King Abdullah spoke on the phone with Palestinian president Mahmoud Abbas and stressed that Jordan would stand by the Palestinian people in its quest for self-determination and the establishment of a Palestinian state with east Jerusalem as its capital.

Meanwhile, Israeli prime minister Binyamin Netanyahu is under pressure from the right wing to push ahead with the application of sovereignty to settlements in the West Bank and to annex the Jordan Valley, even though US administration officials made it clear that Washington was opposed to any such moves until after a new Israeli government is sworn following the Israeli election on March 2nd.

Members of Mr Netanyahu’s Likud party are worried that without concrete steps on the ground the party will lose votes to the smaller right-wing parties who have criticised the prime minister for agreeing to Palestinian statehood as part of the US peace plan.

The Yesha Settlers’ council is holding an emergency meeting on Saturday night to press for immediate annexation.

“The sovereignty issue is frozen. It needs to move forward now,” said council head David Elhayani. “If the prime minister waits until after the election, it will not happen.”

The settlers are particularly concerned over the future of the 15 isolated Jewish communities left outside of the main settlement blocs under the peace deal and plan to build extra homes in these areas.