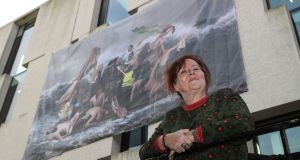 Rita Duffy’s photomontage The Raft Project can be seen on the side of the Long Room Hub building at Trinity College Dublin. Photograph: Nick Bradshaw

How can one image sum up the chaos, enmity and sheer bewilderment of Brexit?

Artist Rita Duffy began The Raft Project at the height of what she described as the “complete and absolute apocalyptic confusion” of Brexit last March.

It was at a time when British prime minister Theresa May lost three successive votes in the House of Commons and the prospect of a hard border became a grim reality.

The photomontage, measuring 9.2m x 5.7m, is a response by the artist to Brexit. Aptly it reinvents French painter Théodore Géricault’s famous oil on canvas The Raft of the Medusa (1818-19), which depicts the shipwreck of French frigate Méduse in 1816.

That painting was a response to the infamous incident in which 150 shipwrecked souls were cast adrift on a raft off the coast of Africa. Over the next 15 days they started to kill and then eat each other. By the time they were rescued, just 10 of them were still alive.

The painting became a symbol of the political nightmares in France that followed the final defeat of Napoleon.

The image of a people lost at sea cannibalising each other seemed apt to the moment of Brexit, said Ms Duffy who is now artist-in-residence at the Trinity Long Room Hub.

The giant work was unveiled on the side of the building, which is 10 years old this year.

The Raft Project is freighted with symbolism. There is an antique union flag and an Irish Tricolour, and a scarf worn by Bono. There is a leg of lamb from a border sheep and the ingredients for an Irish stew. The stew both symbolises Irish ingredients coalescing together but it is also a metaphor for what happens when British politicians meddle in Irish affairs.

An eastern European emigrant wears a T-shirt with a photograph of the Bulgarian president on it. “There’s so much hatred and bigotry towards eastern Europeans migrating into Ireland. I was trying to touch on that,” Ms Duffy said.

He points to the horizon to the ship that is going to rescue them all, but it is the Titanic, with its connotations both of Belfast pride and disaster, and it’s about to hit the iceberg. The iceberg also symbolises climate change. The work is meant to suggest that there are bigger things in the world than Brexit.

“There is a consciousness that we are living in a world going further and further towards the edge of extinction and we are obsessing about nationality when we should be doing directly the opposite,” she said.

“We should be creating more alliances, more partnerships and more a sense of sisterhood and brotherhood across this planet. That’s the only thing that’s going to save us.”

The Raft Project will also be installed in several prominent city locations in London and Paris once it leaves Trinity on February 19th.