In the face of Trump's deal, Palestinians run out of options 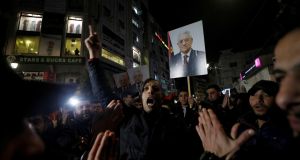 Palestinian president Mahmoud Abbas is desperate to enlist allies in a diplomatic offensive against the Trump administration’s deal to resolve the Palestinian-Israeli dispute.

He is set to call on the support of the Arab League on Saturday before appealing to the 57-member Organisation of the Islamic Conference, the Non-Aligned Movement, and the United Nations Security Council, where any resolution critical of the US or Israel would face Washington’s veto.

Faced with US-legitimised Israeli annexation, Abbas has to take a tough and public stand in order to assert his credibility with his own people and on the regional and international scenes. Determined to stay in office despite his 85 years, Abbas fears being ousted by a figure prepared to accept the Trump plan despite it being rejected by the overwhelming majority of Palestinians .

His position is weak. He is in the 16th year of a four-year term. He stood for election after the death of president Yasser Arafat, who negotiated while endorsing the 1987-1993 and 2000-2005 uprisings to exert pressure on Israel to reach a deal for a Palestinian state in East Jerusalem, the West Bank and Gaza.

By contrast, Abbas called for an end to uprisings and relied on negotiations to achieve Palestinian objectives. He failed miserably.

Abbas has been accused of collaboration by maintaining the security connection while Israel has violated economic and political agreements negotiated after the 1993 Oslo Accord, expanded West Bank and East Jerusalem settlements and cracked down on Palestinian resistance.

Palestinians have few options. Some have called for dissolution of the Palestinian Authority (PA) to force Israel to assume full financial and physical responsibility for the welfare of Palestinians living under Israeli occupation. This has not happened because the international community has financed the authority and the UN agency caring for Palestinian refugees.

Due to rejection of the PA’s dissolution by Israel and the international community, it will continue to administer West Bank Palestinian enclaves, employing 180,000 security agents and civil servants.

Abbas has called for unity with Hamas, which rules Gaza but he has repeatedly failed to cement unity. A third intifada is nearly impossible as Israel has confined Palestinians to tightly controlled cantons.

Many Palestinians call for a “one-state solution”, merger and acceptance by Israel as full citizens with equal rights. Determined to remain a Jewish state, Israel rejects this possibility.

However, a demographic time bomb is ticking: according to Israel’s Central Bureau of Statistics, in 2016 there were 6.5 million Muslims and 6.44 million Jews living under Israeli rule.

Since Palestinian Christians were not counted and the Muslim population has grown more rapidly than the Jewish population since then, the disparity has increased.