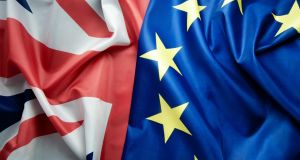 Brexit secretary David Davis retreated from his claim that the agreement last Friday was “a statement of intent” with no legal force. Photograph: Getty Images

The British government has sought to reassure its European partners ahead of this week’s summit that it regards its commitments on the Border after Brexit and other issues as binding.

Theresa May told MPs yesterday that her government’s guarantee that there would be no hard border after Brexit, even if Britain and the European Union fail to agree a free trade deal, stands.

Earlier, Brexit secretary David Davis retreated from his claim that the agreement Ms May reached with European Commission president Jean-Claude Juncker last Friday was “a statement of intent” with no legal force.

Mr Davis said in an interview his government would stand by its commitment regardless of the outcome of trade talks.

“Of course it is legally enforceable under the withdrawal agreement. But even if that did not happen for some reason, [if] something went wrong, we would still be seeking to provide a frictionless, invisible border with Ireland,” he told LBC radio in London.

“What we’re saying is, this bit of it, the bit about full alignment argument, on the issues which affect the peace process and the Belfast Agreement, we would look to that anyway because one of our absolute underpinning aims is to ensure that Ireland, and particularly the Northern Ireland peace process, is not harmed. And what is most symbolic in that is the absence of a hard border, the absence of Border posts and that sort of thing. And we are quite certain we can do that by technical and other means, even if we end up without a deal with the European Union.”

Tánaiste Simon Coveney said the text of what was agreed between the Commission and Britain was what should be heeded rather than individual opinions on the document.

“We are very clear in terms of what maintaining full alignment [is] with the rules of the single market and customs union in order to maintain North-South co-operation, an all island economy and the full implantation of the Good Friday agreement,” said Mr Coveney.

Ms May told MPs that the deal was good news for everyone in Britain, regardless of how they voted in last year’s referendum.

“We are going to leave but we are going to do so in a smooth and orderly way, securing a new deep and special partnership with our friends while taking back control of our borders, money and laws once again,” she said.

EU leaders are expected to authorise the start of negotiations on a transition phase after Brexit as well as the beginning of talks about a future trade deal. But the prime minister said it could be as late as March next year before the terms of a transition deal are agreed.