Anti-Semitic chants in Berlin, Gothenburg and Vienna in wake of US Jerusalem decision 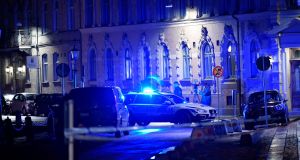 Police attend site of an attack near a synagogue in Gothenburg, Sweden, on December 9th. Photograph: Adam Ihse/Reuters

German leader Angela Merkel has condemned the burning of Israeli flags during weekend demonstrations in Berlin, amid pan-European protest at US recognition of Jerusalem as Israel’s capital.

Anti-Semitic chants were heard at demonstrations in Berlin, Vienna and in Gothenburg, Sweden, where three people were arrested after a molotov cocktail attack on a city synagogue. In Berlin, protesters shouted “Death to Israel”; in Vienna, protesters were heard shouting “Slaughter the Jews”.

The weekend demonstrations were condemned on Monday by politicians of all political parties.

“We reject all forms of anti-Semitism and xenophobia,” said Dr Merkel on Monday in Berlin. “The state must use all means to intervene and prevent this.”

But Berlin police came under fire for failing to stop the weekend marches. Fearing escalation, they waited until the end of a demonstration on Friday outside the US embassy at the Brandenburg Gate to arrest 10 people and charge them with violation of a foreign state’s sovereign symbols.

Israeli flags were set alight on Sunday evening in Berlin’s Neukölln district at a march attended by at least 1,000 people.

On Monday, Dr Merkel’s spokesman, Steffen Seibert, said constitutional freedoms of free speech and assembly were no excuse for “slander against the state of Israel and Jews in general”.

“One has to be ashamed when hatred of Jews is put on display so openly on the streets of German cities,” he said, noting Germany’s “particular responsibility towards Israel and the Jewish people” after the Nazi-era murder of six million Jews in the Holocaust.

German foreign minister Sigmar Gabriel said he was fearful the US decision would pour “fuel on the fire” in the Middle East.

Likes its EU neighbours, Berlin does not support US president Donald Trump’s decision to move the US embassy from Tel Aviv to Jerusalem, insisting Jerusalem’s status can only be negotiated as part of a two-state solution between Israel and the Palestinians.

In Sweden, after violent protests in Malmö and Stockholm, Gothenburg police detained three people suspected of a synagogue arson attack.

The Molotov cocktail attack took place at about 10pm on Saturday while 30 young people were in the community centre adjoining the synagogue. “There was a strong fire in the yard, but then it rained and the flames went out quickly,” Allan Stutzinsky, a spokesperson for the Jewish Community in Gothenburg, told the TT news agency.

Security has been stepped up at Jewish buildings across Sweden while prime minister Stefan Lövfen said there was “no place” for anti-Semitism in his country.

As the World Jewish Congress warned European politicians that “no one can say they didn’t see this coming”, Israeli ambassador to Germany Jeremy Issacharoff said that “whoever burns flags, burns their decency and tolerance”.

Last week, as Mr Trump made his announcement in Washington, Berlin’s Jewish Museum opened a new exhibition on the history of Jerusalem.

Curator Cilly Kugelmann said: “With this announcement, Donald Trump will trigger a third intifada, with increasing attacks and violence and, in the end, Israel will pay the price.”