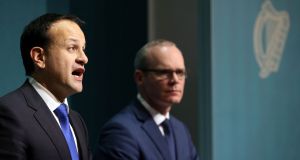 Voters are full square behind the muscular approach to Brexit taken by Taoiseach Leo Varadkar and the Minister for Foreign Affairs Simon Coveney, the latest Irish Times/Ipsos MRBI poll finds.

More than two-thirds of those polled support the threat by the Government to block progress to the second phase of the Brexit talks – as repeatedly requested by London – unless the British government provides adequate guarantees that there will not be a hard border in the future.

The result comes after Thursday’s poll finding of big gains for Fine Gael in the wake of clashes with the British government over the collapse of the Brexit talks earlier in the week.

Asked if Ireland should use its veto to prevent the talks from moving on if the British fail to provide sufficient assurances, 68 per cent of voters said the Government should use the veto.

The Government has repeatedly said it does not have to use a formal veto, as other EU member states have said they will not move on with the talks unless Ireland is satisfied on the Border issue.

Just 13 per cent of voters said Ireland should not use its veto, with 19 per cent expressing no opinion.

Support for the use of the veto was consistent cross all age groups and demographics, with the strongest support coming from the highest income earners (those in the AB group), where 80 per cent were in favour. Almost three-quarters of farmers (72 per cent) support the tough line.

Supporters of all parties backed the veto. Among Fine Gael voters, 73 per cent were in favour, with a similar proportion of Fianna Fáil voters saying they agreed with the proposals. Sinn Féin and Independent voters showed agreement in their views, with 70 per cent of Sinn Féin supporters and 69 per cent of those behind Independents in favour of the Government’s approach.

The only outliers among the parties were Labour supporters, where just over half (51 per cent) are in favour of the plan, though with Labour at just 4 per cent in the polls, this sample is small.

The Irish Government has refused to budge from its position that the British government must supply cast-iron guarantees that there will be no hard border in the future or it will refuse to sanction a decision to move on to the second phase of the talks. The Irish position has angered the pro-Brexit lobby in London, which is anxious to begin the next phase.

That phase – which was due to begin in January – depends on next week’s European summit deciding that sufficient progress has been made on phase one. Without agreement between the Irish and British governments on Friday or over the weekend, the summit will be unable to give the go-ahead, further angering the pro-Brexit lobby.

The poll was conducted on Monday and Tuesday of this week among a representative sample of 1,200 voters aged 18 and over in face-to-face interviews at 100 sampling points in all constituencies. The margin of error is plus or minus 2.8 per cent.