Roy Moore ahead in Alabama’s divisive US Senate race 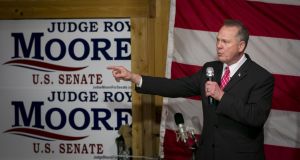 Republican candidate for the US Senate Roy Moore has secured the backing of president Donald Trump. Photograph: Bloomberg

Voters in Alabama go to the polls on Tuesday in a closely-watched election to fill the Senate seat vacated by attorney general Jeff Sessions as former president Barack Obama weighed in behind the Democratic candidate.

In an election campaign dominated by the scandal over Republican candidate Roy Moore Mr Obama recorded a campaign telephone message targeted at Alabama voters. The 70-year-old Mr Moore, former chief justice of Alabama, has been accused of sexual misconduct with underage women,

“This one’s serious, you can’t sit it out,” said the former president.

Controversy over Mr Moore’s candidacy has fuelled hope among Democrats that their candidate, Doug Jones, could be in the running to take the seat vacated by Mr Sessions when he was appointed in January. It is more than 20 years since a Democrat has won a Senate seat in Alabama. And 63-year-old Jones is a well-known prosecutor who rose to prominence for his role in prosecuting the white supremacists responsible for the 1963 16th street Baptist Church bombing that killed four African-American girls. The incident was a turning point for the civil rights movement.

However, polls suggest Mr Moore, who beat Luther Strange in a Republican primary election in September, is ahead despite being dogged by allegations of sexual misconduct.

On Sunday, the state’s senior senator, Richard Shelby, became the latest high-profile Republican to oppose Mr Moore’s candidacy. He said Alabama could “do better” than elect Mr Moore, confirming that he had already cast an absentee vote for another Republican candidate, though he declined to identify which one.

While senior members of the Republican party, including senate majority leader Mitch McConnell oppose Mr Moore, President Trump has backed the Republican candidate. In his own telephone message, released on the eve of the vote, Mr Trump urged Alabama voters to endorse Mr Moore.

“This is President Donald Trump and I need Alabama to go to vote for Roy Moore,” he said, adding that “all of our progress will be stopped cold” if a Democrat is elected. “We need Roy to help us with the Republican Senate. We will win and will make America great again.”

Several women have accused Mr Moore of inappropriate sexual behaviour while they were teenagers, including a woman who accused the judge of initiating sexual contact when she was 14.

Mr Moore denies the allegations, saying he does not know the accusers.

The controversy has also moved Mr Trump’s alleged sexual misdemeanours back into focus. More than a dozen women accused the president of inappropriate sexual activity during the presidential campaign. Mr Trump denies the allegations.

In an apparent break with White House policy US ambassador to the United Nations Nikki Haley said on Sunday that she believed that those women who accused Mr Trump of sexual misconduct “should be heard.”

“They should be heard, and they should be dealt with,” she said. “I think we heard from them prior to the election and I think that any woman who has felt violated or felt mistreated in any way, they have every right to speak up.”

Asked about Ms Haley’s comments, White House press secretary Sarah Huckabee Sanders replied that the president had said he thinks it’s good that women are coming forward. “But in this case the president has denied any of these allegations. As have eyewitnesses. The American people knew this and voted for the president,” she said.