Britain will have to choose next year between unattractive futures

UK Politics: London and Brussels should aspire to a Brexit trade deal but take their time about it 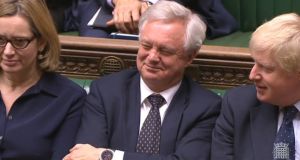 When we postpone a chore or leave a tough conversation for another day, it is in the rational hope that we might never have to do it. Sometimes we turn out to be right. There is more to procrastination than laziness or cowardice. It is a legitimate life tactic. Anyone who believes that all problems must be confronted at their inception as a point of chivalric principle will end up volunteering for a lot of avoidable stress in life.

Britain can procrastinate its way out of the fix it has tied itself up in. In 2016, it voted against EU membership on the promise that something better was easily available. In 2017, it lost that illusion as one-sided exit talks were settled on the EU’s terms. In 2018, it will have to choose between unattractive futures: a trade deal with Europe that diminishes its access to the world’s largest internal market, or membership of that market without a say on the rules that govern it.

Having seen the government back down on item after item, and abandon its interest in an exit with no deal at all, Remainers sniff the air for Theresa May’s next concession.

They are trying to sell the prime minister on the least bad of two plausible destinies: Norwegian enmeshment with the single market rather than Canadian trade terms from outside. But this implies the survival of free movement, which breaks the red line that she drew so hastily in her opening months in office. Voters and her own MPs might not tolerate such a provocative reversal, even if she would.

The real prize, therefore, is now the transition phase between membership and whatever follows. The longer it lasts, the less disruption for each side and the more chance of some deus ex machina that creates a more pleasing permanent solution. This might take the form of a continued decline in net immigration that changes the domestic political debate or the emergence of a new tier of membership as the EU passes through one of its periodic bursts of institutional mutation.

In short, London and Brussels should aspire to a trade deal but take their sweet time about it. They should use the inherent lengthiness of economic diplomacy as a convenient cover for a delay that suits them anyway. The transition was always going to last for around two years. You now hear serious people whisper about something closer to five years, or at least the renewability of the initial two.

This holding position will be uncomfortable. Indeed, it might amount to the Norwegian model of membership without representation. In a world of bad options, however, this is not the very worst. To understand the flaws of the Canadian model, remember that even David Davis aspires to a “Canada-plus-plus-plus” deal. The Brexit secretary is, almost by definition, conceding the case against a bare trade agreement that excludes services. Others may join him as time passes. The key is to maximise that time.

When you start to look for them, the political world is full of artful prevarications. Last week’s compromise on the UK-Ireland border that enabled the second round of talks contains no substantive answer to anything. It just creates time and space for one to emerge, or for the problem to go away. It resembles the principle of transition in miniature. May’s ongoing survival in a job that everyone agrees is untenable qualifies as another case in point.

Norway itself is entering the 24th year of its “temporary” compromise between membership and non-membership of the EU, with no sign of an imminent commitment to one or the other.

Central to all these managed delays is their sensitivity to amour propre. All parties can claim some kind of victory. A long transition would allow Leavers to say that Britain is on its way out of the EU and Remainers to console themselves with the remoteness of the actual day of exit, and the faint prospect of its indefinite postponement.

It gives business some measure of certainty. Nor should it be any great nuisance to the EU, whatever its desire to put the British question behind it. An organisation that has been able to conclude a trade agreement with Japan while getting its way on the terms of exit can afford to be magnanimous.

Last week’s exit deal has put Britain on a stable course to an invidious end point. There is less turbulence on this flight than some had feared but the destination is still a shabbier resort than the one we have known, complainingly, for more than 40 years. Why not prolong the journey and hope a change in weather forces a diversion to somewhere better? – Copyright The Financial Times Limited 2017