Speaking at the Munich Security Conference in Germany, Israel’s prime minister Benjamin Netanyahu brandishes what he says was part of an Iranian drone shot down by Israel. 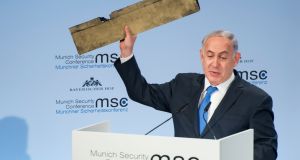 Prime minister Binyamin Netanyahu said on Sunday that Israel could act against Iran itself, not just its allies in the Middle East, after border incidents in Syria brought the Middle East foes closer to direct confrontation.

In his first address to the annual Munich Security Conference he said, Iranian aggression “is in my judgment the greatest threat to our world”.

Iran mocked Mr Netanyahu’s tough words, saying Israel’s reputation for “invincibility” had crumbled after one of its jets was shot down following a bombing run in Syria.

At the conference, which draws security and defence officials and diplomats from across Europe and the US, Mr Netanyahu held up a piece of what he said was an Iranian drone that flew into Israeli airspace this month.

“Israel will not allow the regime to put a noose of terror around our neck,” he said. “We will act if necessary not just against Iran’s proxies but against Iran itself.”

For his part, Iran’s foreign minister, Mohammad Javad Zarif, called Mr Netanyahu’s presentation “a cartoonish circus, which does not even deserve a response”.

“What has happened in the past several days is the so-called invincibility [of Israel] has crumbled,” Mr Zarif, who addressed the conference hours after Mr Netanyahu, said, referring to the downing of the Israeli F-16, which crashed in northern Israel after a strike on Syrian air defences.

“Once the Syrians have the guts to down one of its planes it’s as if a disaster has happened,” Mr Zarif said, accusing Israel of using “aggression as a policy against its neighbours” by regularly carrying out incursions into Syria and Lebanon.

Mr Netanyahu said that as the Islamic State militant group has lost ground, Iran and its allies were surging into territory, “trying to establish this continuous empire surrounding the Middle East from the south in Yemen but also trying to create a land bridge from Iran to Iraq, Syria, Lebanon and Gaza”.

The tough words on both sides at the international event come as Israel is increasingly seeking to co-operate with Sunni Arab states that share its worries about Shia Iran. For months, Mr Netanyahu has touted what he describes as unprecedented levels of behind-the-scenes co-operation.

“The fact that we have this newfound relationship with the Arab countries – something that . . . I would not have imagined in my lifetime – this is not what they call a spin,” Mr Netanyahu said, during a question and answer session after his speech.

“This is real, it’s deep, it’s broad: it doesn’t necessarily cross the threshold of a formal peace, and I doubt that would happen until we get some formal progress with the Palestinians – so the two are linked,” he added.

Israel has formal peace agreements with just two Arab countries, Egypt and Jordan. Others have said a pre-condition of any such treaty is an Israeli deal with the Palestinians.

Among Israel’s main concerns is Lebanon, where the heavily armed Iran-backed Shia militia Hezbollah is part of a coalition government. Israel last fought a war against Hezbollah in 2006. Tension between Israel and Lebanon has increased as Hezbollah has gained strength fighting in Syria, and the two countries also have a maritime border dispute.

Israel has carried out air strikes in Syria against suspected Iranian arms shipments to Hezbollah and has accused Tehran of planning to build missile factories in Lebanon.

Lebanon’s defence minister, Yacoub Riad Sarraf, who spoke after Mr Netanyahu, warned against intervention: “Watch out, we will defend ourselves . . . we also have friends.”

Mr Netanyahu also reiterated his view, shared by US president Donald Trump, that world powers needed to scrap or rewrite the 2015 nuclear accord with Tehran that curbs Iran’s nuclear weapons ambitions in return for economic sanctions’ relief.

“It’s time to stop them now,” Mr Netanyahu said. “They’re aggressive, they are developing ballistic missiles, they’re not inspecting, they have a free highway to massive [uranium] enrichment,” he said of the fuel needed for nuclear weapons.

France, Britain, Germany, Russia and China, which signed the nuclear deal along with Iran and the US, say the accord is working and Iran is allowing inspections.

Russian senator Aleksey Pushkov said scrapping the agreement was akin to choosing between war and peace. John Kerry, the former US secretary of state who helped clinch the agreement, said it was wrong to assume Iran would obtain a nuclear weapon as soon as the 15-year scope of the deal ends.

Cabinet expected to extend restrictions on travel at meeting