Students at Marjory Stoneman Douglas High School in Parkland, Florida, share their experiences of a deadly shooting by a former student. Video: Reuters 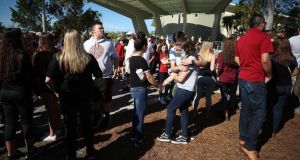 Police in Florida are still searching for a motive behind the deadliest mass shooting in the United States this year, as 19-year-old Nikolas Cruz was charged with 17 counts of premeditated murder at a court in Florida on Thursday.

Seventeen teachers and students lost their lives and at least 15 more were injured after the gunman opened fire at the Marjory Stoneman Douglas High School in Parkland on Wednesday.

Mr Cruz, who had attended the school before being suspended and then expelled last year, was ordered to be held without bond at a court hearing in Fort Lauderdale.

He could face the death penalty if convicted.

It emerged that the FBI had been warned about Mr Cruz following a series of social media postings last year including a YouTube posting containing the comment: “I’m going to be a professional school shooter.”

A blogger from Mississippi contacted the FBI in September and was interviewed the following day, but heard nothing from the bureau until Wednesday, hours after the shooting.

The FBI’s special agent in charge of the Miami division, Robert Lasky, confirmed on Thursday that the FBI had been informed of the YouTube posting, but was unable to identify the person who had made the comment.

“No other information was included with that comment which would indicate a time location or the true identity of the person who made the comment,” he said.

Broward County sheriff Scott Israel said on Thursday that other schools in the area received copycat threats in the wake of Wednesday’s attack in Parkland. While some may be pranks, he said law-enforcement officials were taking the threats seriously. “We will investigate this and charge anyone accordingly with the maximum charge we possibly could for doing something so horrific, so pathetic,” he said.

Ron Runcie, superintendent of schools in Broward County said that grief counsellors were on site at the school and other schools in the area. “Every minute of the day we are focusing on how we can support our families, our students and our staff as we work through this horrific situation.”

He added: “Now is the time for this country to have a debate about sensible gun control.”

But others in Washington were less eager to blame gun laws for the crime, instead focusing on the suspect’s mental health.

Senator Marco Rubio, a Republican from Florida, disputed whether new laws would have prevented the shooting. “When one individual decides in a premeditated and orchestrated way that they’re going to carry something like this out, it can happen anywhere,” he said on Fox News. “This is an isolated instance, but a very tragic and catastrophic one, where you have one individual in a perfect storm of circumstances.”

Similarly, president Donald Trump focused on the suspect’s mental health in a number of tweets on Thursday morning and in his televised address to the nation.

“So many signs that the Florida shooter was mentally disturbed, even expelled from school for bad and erratic behaviour,” he tweeted. “Neighbours and classmates knew he was a big problem. Must always report such instances to authorities, again and again!”

Florida’s governor, Rick Scott, promised to bring forward discussion on ways to improve school safety, and said he had discussed the matter with both the president and the House Speaker Paul Ryan. He also said people with mental health issues should not be permitted to buy guns.

Among the victims named on Thursday were Aaron Feis, an assistant football coach at the school; Scott Beigel, a geography teacher; and students Alyssa Alhadeff, Nicholas Dworet and Jaime Guttenberg.