Students who survived the shooting at Marjory Stoneman Douglas High school condemn gun laws in the US at an angry and somber anti-gun rally in Fort Lauderdale. Video: Reuters 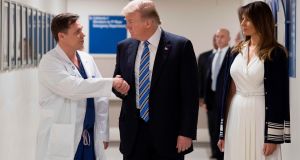 US president Donald Trump has criticised the FBI after the agency disclosed that it failed to follow up on a detailed warning about the 19-year-old gunman who is charged with killing 17 people and wounding a dozen others at a Florida high school on Wednesday.

“Very sad that the FBI missed all of the many signals sent out by the Florida school shooter. This is not acceptable,” Mr Trump tweeted on Saturday night.

A “person close to Nikolas Cruz” contacted the FBI’s public access tipline on January 5th to “report concerns about him”, the FBI said in a statement on Friday. The caller provided information about “Cruz’s gun ownership, desire to kill people, erratic behaviour, and disturbing social media posts, as well as the potential of him conducting a school shooting”, the statement said.

Florida Governor Rick Scott said the FBI’s failure was “unacceptable” and called for the resignation of FBI director Christopher Wray. “Seventeen innocent people are dead and acknowledging a mistake isn’t going to cut it,” Scott said in a statement. “The FBI director needs to resign.”

Chris Christie, former governor of New Jersey and a Trump supporter, told ABC News’ This Week that the president “should stay out of law enforcement business”. “I think that’s what the president will do, and I think he’ll leave it to director Wray, the other folks at the justice department and out intelligence community to do what needs to be done to protect our electoral process,” Mr Christie said.

Attorney general Jeff Sessions said he has initiated a justice department review of how the FBI acted. “It is now clear that the warning signs were there and tips to the FBI were missed. We see the tragic consequences of those failures,” he said in a statement.

The revelation comes as Mr Trump and congressional Republicans have criticised the FBI for its conduct of investigations into his campaign and into Hillary Clinton’s use of private email while she was secretary of state. The FBI is “spending too much time trying to prove Russian collusion with the Trump campaign – there is no collusion. Get back to the basics and make us all proud!” Mr Trump tweeted on Saturday.

Very sad that the FBI missed all of the many signals sent out by the Florida school shooter. This is not acceptable. They are spending too much time trying to prove Russian collusion with the Trump campaign - there is no collusion. Get back to the basics and make us all proud!

Mr Trump earlier also suggested on Twitter that the Parkland, Florida, community should have reported suspicions about Cruz to authorities. “So many signs that the Florida shooter was mentally disturbed, even expelled from school for bad and erratic behaviour. Neighbours and classmates knew he was a big problem. Must always report such instances to authorities, again and again!” he said.

Broward county sheriff Scott Israel said at a Friday news conference that his office had received more than 20 calls about Cruz in the past few years, according to the Associated Press.

Florida senator Marco Rubio, a Republican, and representative Ted Deutch, a Democrat who represents the area, said Congress must conduct its own investigation. “Our system utterly failed the families of 17 innocent souls,” Mr Rubio added in a statement emailed to reporters.

“We have determined that these protocols were not followed for the information,” the Federal Bureau of Investigation said. “The information was not provided to the Miami field office, and no further investigation was conducted at that time.”

Authorities said that Cruz attacked the school with a semiautomatic AR-15-style rifle that he bought legally. It was the same type of firearm that’s been used in many mass shootings, including in Las Vegas last year, Orlando in 2016 and at Sandy Hook elementary school in Newtown, Connecticut, in 2012.

The Parkland massacre was the deadliest school shooting since 20 children and six adults were killed in the rampage at Sandy Hook.

Cruz has admitted to the shooting, according to an arrest affidavit reported by the New York Times and others. Mr Wray said he was “committed to getting to the bottom of what happened in this particular matter, as well as reviewing our processes for responding to information that we receive from the public”.

On Friday, Mr Trump met medical staff and some victims at Broward Health North Hospital and also stopped at the Broward sheriff’s office. He made the visits on the way to his Mar-a-Lago resort in Palm Beach. He later tweeted pictures from the hospital visit, with the comment: “Our entire Nation, w/one heavy heart, continues to pray for the victims and their families in Parkland, FL. To teachers, law enforcement, first responders and medical professionals who responded so bravely in the face of danger: We THANK YOU for your courage!”