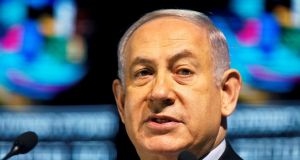 On Tuesday, the Israeli police concluded that there was an evidentiary foundation to charge prime minister Binyamin Netanyahu with bribery, fraud and breach of trust in two separate graft cases.

In “Case 1,000”, Netanyahu received gifts worth €230,000 from the Israeli-born Hollywood producer Arnon Milchan and other wealthy friends. “Case 2,000” centres on an allegation that Netanyahu asked the publisher of the Yediot Aharonot newspaper for positive coverage in exchange for help in reining in a rival publication.

The alleged offences are severe crimes that carry lengthy jail terms. Bribe-taking is an offence punishable by 10 years’ imprisonment, and fraud and breach of trust convictions can result in a three-year jail term. However, there have been cases in the past where the police concluded that there was an evidentiary foundation to indict a prime minister, but the attorney general thought otherwise.

The police recommendations are not binding on attorney general Avichai Mandelblit, who will ultimately decide, after consultations with the state attorney’s office, whether there are grounds to indict Netanyahu, and for which offences.

The process is expected to take many months. The main consideration that will guide the attorney general is whether the evidence is sufficient for an indictment – ie, whether there is a reasonable chance of conviction.

Under Israeli law, Netanyahu is not required to step down, even if indicted, although most commentators believe his position will be untenable if he is brought to trial.

On the political front, the dramatic police conclusions do not appear to have endangered Netanyahu’s coalition.

Speaking on Wednesday, Netanyahu made it clear that he did not intend to move forward elections scheduled for November 2019. He described the police recommendations as “biased, extreme and as full of holes as Swiss cheese”.

The message from all the coalition partners was basically the same: let’s wait and see what the attorney general decides.

The clearest criticism from within the coalition came from the head of the far-right Jewish Home party, education minister Naftali Bennett, but even he stressed that Netanyahu still enjoys the presumption of innocence.

“The prime minister of Israel has to serve as an example to the entire Israeli public, and especially to the Israeli youth. Taking gifts in large sums over a long period of time is not living up to this standard,” Bennett said.

But in general, coalition politicians rallied around the prime minister on Wednesday, venting much of their anger at Yair Lapid, chair of the opposition Yesh Atid party, and the current leading candidate to replace Netanyahu as prime minister if a centre-left coalition was to come to power.

One of the surprises in the police conclusions was the revelation that Lapid will be a witness for the prosecution. Lapid served as finance minister in the last Netanyahu government and the police recommendations show that Netanyahu tried to extend a Bill that would have given Milchan tax benefits worth millions of shekels.

The leader of the opposition Zionist Union, Avi Gabbay, said the Netanyahu era was over. He said the prime minister and his proxies had undermined the police and the institutions of government as no other suspect ever had before.

Opposition politicians also pointed out that when former prime minister Ehud Olmert faced corruption allegations, Binyamin Netanyahu, then leader of the opposition, was the most prominent voice demanding that he immediately step down.