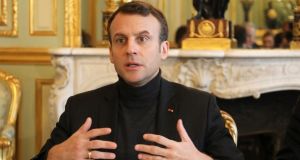 President Emmanuel Macron has called for a “recomposition” of political groupings within the European Parliament and indicated that he is likely to found a new Europe-wide party based on the movement that brought him to power.

The French leader confirmed his intention to transpose the method that disrupted French politics on to the European political scene, in the first wide-ranging press conference since his election.

“Europe needs a political recomposition if we are to make progress,” Mr Macron told 120 members of the Presidential Press Association this week. He said greater unity is need to address migration, banking union, the transition to renewable energy, digital technology and defence.

“It is completely possible that we will found our own group [in the European Parliament], to federate other movements,” Mr Macron continued. “It’s a good idea to work for ideological clarification. There is room for progressive, determined, European reformism . . . It will happen at the time of [the May 2019] European elections and afterwards.”

An EU-wide party similar to Mr Macron’s La République En Marche would bring together moderates from both left and right, as well as environmentalists.

The French president said contradictions within the European People’s Party, of which Fine Gael is a member, and the Party of European Socialists, are blocking progress.

“The DNA of the EPP is Christian Democrat,” Mr Macron said. “But I’m not convinced that [former prime minister of Italy Silvio] Berlusconi or [Hungarian prime minister Viktor] Orbán are the quintessence of European Christian democracy. There are also fundamental differences between European Socialists regarding Europe.”

An Italian correspondent took Mr Macron to task for comparing Mr Berlusconi to Mr Orbán, the leader of an increasingly obstreperous bloc of former east European countries. Mr Macron said the far-right Northern League and Brothers of Italy, Berlusconi’s allies in the March 4th Italian elections, were “not representative of Christian Democracy” either.

The French president reiterated his threat to strike Syrian government forces if it is proven that President Bashar al-Assad has used chemical weapons against civilians. “I set a red line. I reconfirm that very clearly,” Mr Macron said. “If we have solid proof that chemical weapons banned by the treaties are used, we will strike the place from which they originated.”

But Mr Macron’s “red line” looks increasingly fictional. Some analysts took the words “banned by the treaties” to mean that France distinguishes between chlorine and neurotoxic sarin. Though it can be lethal, chlorine is not always considered a weapon because it also has industrial uses.

One week earlier, French foreign minister Jean-Yves Le Drian said “all indications are today that chlorine is being used by the regime in Syria”.

Mr Macron also stressed that “the priority is the fight against terrorists, the jihadists”. He called for an international meeting on Syria to be held in the region.

France does not want French jihadists captured in Iraq and Syria to be repatriated. But if the Iraqi government condemns French citizens to death, Paris will attempt to have their sentences commuted to life in prison, Mr Macron said.

Turning to domestic policies, Mr Macron said he was not concerned by polls showing that a strong majority of the population do not believe he will increase their purchasing power.

“The only way to raise purchasing power quickly is to increase public expenditure. That is not our strategy,” he said, promising perceptible results by 2020. Work was “the guiding principle” of his policies, Mr Macron said. “Full employment is the best way to fight for purchasing power.”

Chronic, structural unemployment of about 9 per cent in France was a “scandal”, Mr Macron continued. “We are the only great economy of Europe that has sunk into mass unemployment for the past three decades.” After he spoke, the statistics institute Insee reported that French unemployment had fallen to 8.7 per cent, its lowest since 2009.

Mr Macron ended confusion about his plan to establish “universal national service”, saying it would be obligatory for men and women, civil or military, and would last from three to six months.

Mr Macron had promised there would be no one sleeping rough in France by the end of last year. “We failed because there are fragile populations not reached by public policies, and because there was strong migratory pressure,” he said.

Mr Macron addressed accusations of sexual aggression against two of his cabinet ministers for the first time. He said he could not have known of cases dismissed before they were appointed. He warned against a “republic of suspicion” and said that when media “end up destroying those who exercise power, without principle or limits, it is not a balanced democracy”.