British hopes of fresh Brexit deal shot down in Brussels 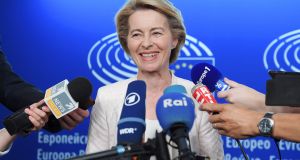 British hopes that a change in European Union leadership may lead to a willingness to renegotiate the Brexit deal with a new Conservative leader have been firmly shot down in Brussels.

UK leadership contenders Boris Johnson and Jeremy Hunt have expressed confidence in election hustings that they can reopen talks on the deal and specifically the contentious “backstop” to avoid a hard Irish border.

However, European Commission president-designate Ursula von der Leyen has, speaking to MEPs and journalists over recent days, reiterated her strong support for the deal and backstop as “absolutely necessary.”

Sources close to the German defence minister, who faces a ratification vote in the European Parliament on Tuesday to lead the EU’s executive, say although she would have liked Britain to remain in the EU, she considers the proposed EU-UK withdrawal agreement a good deal “that we need to stick to without any question”.

She cautioned that maintaining the right tone in talks was crucial “without being nasty or taking revenge” because the way Brexit is dealt with will determine the future relationship with the UK.

DUP chief whip Jeffrey Donaldson said his pro-Brexit party would “look at whatever proposals the Irish Government puts forward” to avoid a hard border with checks at ports, but they will be judged against the party’s “very clear red lines” objecting to any border in the Irish Sea.