What the British Ambassador would say about Ireland 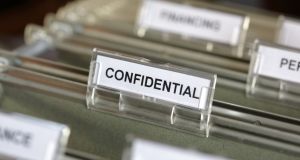 We have obtained a top- secret, highly classified cable sent by a British diplomat in Dublin back to Whitehall. It reads as follows . . .

To say that the Irish are keeping their cards close to their chest on this Brexit thing is an understatement. If one more of them tells me that the withdrawal agreement is not up for negotiation I shall have to apply for a transfer to somewhere more amenable. Even trying to talk off the record with senior people here (and I know my expenses receipts may appear a bit excessive) it is hard to break through the “not an inch” veneer on the agreement and the backstop.

One wonders is this unwillingness to engage because they have a plan – or are just hoping for the best. Perhaps it is what it is – no real movement will be countenanced. Certainly I wouldn’t expect them to show their hand until later in the game. They will want to see what the new prime minister does, as opposed to going by the noise from the Tory leadership hustings.

So once the new PM is installed, it will be up to our side to try to put on the pressure. Assuming, indeed, we have a policy ourselves – you might let me know on that. Up to now we have all-too-often looked – to borrow a word much-used these days – “inept”. All this talk of alternative arrangements to avoid Border checks isn’t going to cut the mustard in Brussels.

Time is so short, and our likely new PM is so unpopular in European capitals, that there would seem to be a risk of the whole thing blundering into a “no-deal” situation. The Irish government knows this too – but so far Varadkar and Coveney are sticking to the party line. But they will surely want to explore any route which would avoid a no-deal crash.

Are we getting any intelligence from Berlin or Paris on where the big players stand on this one? Or are our people there still stuck in front of the office fans giving out about the heat – the poor things ?

The view here seems to be that if the UK does crash out we will be back, cap in hand, in a few weeks looking for a deal. And thus the backstop plan could be dusted off as a demand from the EU side and we will be under pressure to sign up. Perhaps that is how it would go. Or perhaps not. The departure of our colleague in the US does seem to suggest a policy of finding a new best pal on the far side of the Atlantic.

We did see a few interesting signals in Dublin this week. The warnings about the consequences of a no-deal are being ramped up. And Simon Coveney – the one who seems most fond of lecturing us on the Belfast Agreement – did concede that Border checks would have to take place somewhere in the event of a no-deal Brexit. Which of course is obvious – just no one in officialdom has said it here before.

We all know that the stuff about getting traders to register in advance and using technology can only get us so far. Not to put too fine a point on it, there isn’t any technology that can lift us a cow’s tail and take her temperature as she enters the EU’s precious single market. And Dublin will know that checks a few miles away from the Border would be almost as politically toxic as infrastructure at the Border itself.

Hence no clarity on how this might all happen. I tried to probe a senior official on this, but all I could get was the Father Ted defence – “that would be an ecumenical question.” Or rather a very tricky political one. Make no mistake, Dublin will be in a bind here in the event of a no-deal , trying to avoid a hard Irish Border but also trying to retain full Irish membership of the EU single market.

We did get another hint on Friday when Varadkar said Ireland would press after a no-deal Brexit for the North and Republic to remain in one zone for animal and food health and safety. This would avoid border checks in this area – and customs and excise checks might, he suggested, be possible without infrastructure. But the DUP will object, of course, because it means following EU rules in this area and more checks on animals and foods entering the North from Britain.

Will this lead Ireland to be ready to compromise on the backstop plan at the last minute? As yet we haven’t even managed to put this question on the table. Some kind of time limit has been suggested on the backstop, or some escape mechanism for the UK, but this would be a big step back from Dublin. But they will want to avoid no deal, too.

Of course there is one other way forward. Go back to the original backstop plan – the one involving just Northern Ireland remaining in the EU single market – and get the withdrawal agreement through. The original backstop involved the North remaining in the same customs and regulatory regime – more than just for animal and food safety as Varadkar suggested in the event of a no-deal Brexit. For the DUP, this is even worse. Might they compromise? Somewhere?

Interestingly we saw one of the big business lobbies in the North this week saying they saw its economy acting as a bridge between the EU and the UK after Brexit. And Varadkar appealed directly to Ulster’s farmers. But for as long as our government relies on the DUP, it doesn’t look likely to happen. Has anyone over there got any other ideas?

1 Why are markets booming when a crash is on the way?
2 Bobby Storey: The IRA's planner and enforcer who stayed in the shadows
3 Full line up of junior ministers unveiled as Taoiseach accused by one TD of snub
4 Open Ireland as soon as possible - Tourism chief warns of 'catastrophic' impact of pandemic
5 Irish holidaymakers have been thrown under the bus
Real news has value SUBSCRIBE