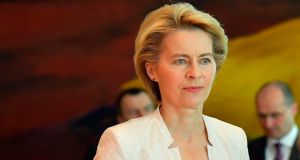 Ursula von der Leyen has no illusions about Tuesday’s vote in the European Parliament. The last 12 days has propelled Germany’s quiet-spoken defence minister into a political maelstrom since EU leaders at the European Council proposed her as president of the European Commission, seemingly out of the blue, as a compromise candidate to succeed Jean Claude Juncker.

The first she knew about it was a call on the Monday night, July 1st, of the extended summit – “if the commission presidency job was offered, would she take it”? She didn’t hesitate, although admitting to being awestruck at the prospect, but she had always wanted a crack at a commissioner stint.

Now she has been offered the top job. Back to Brussels where she was born and had gone to school, back to the multilingual environment she loves.

The process of ratification by MEPs that normally takes at least a month, has been shoehorned into barely two weeks, amid a fierce tussle between the two institutions.

Her nomination is part of a deal between EU leaders that is dependent on their being able to whip their MEPs into line: the council presidency to Belgium’s Charles Michel; parliament presidency to a Socialist. Both now in place, but the troops are not so pliable.

It was easier in the old days when her party, the centre-right European People’s Party (EPP), and the Socialists and Democrats dominated the parliament. As she writes her speech for Tuesday and prepares a programme of priorities, she has spent many hours meeting, wooing the groups one by one.

On Saturday night there was an “off the record” extended meeting to soften up the sceptical journalists.

Now, however, there are more new MEPs than ever, no two-party majority, and a proliferation of new parties. Up and coming liberals of Renew Europe and Greens all want a say, not just in who fills the job but in the commission’s agreed priorities for the next five years.

And there are ruffled sensibilities, notably in the Socialists and Democrats, over the leaders’ refusal to go with their nominee under the parliament’s Spitzenkandidat system.

The German Socialists and Democrats are particularly unforgiving about the rejection of their man, Dutch commission vice-president Frans Timmermans. And they are unlikely to vote for her despite a plea from their party leadership.

She needs the votes of 376 out of 750 MEPs – that is possible with EPP, some Socialists and Democrats and RE votes. But would it be enough to give her legitimacy? Surely 400 would be necessary?

Could she accept a majority which was secured only with support from some of the Eurosceptic forces in the parliament, like the Polish Law and Justice members of the European Conservatives and Reformists (ECR) group? Yes, but there “cannot be a compromise on the rule of law”, she is said to have insisted to the group when she met them.

And it’s not enough to tick the boxes. On climate change there is a delicate political line to tread

She will not say whether Timmermans, back as first vice-president as part of the leaders’ deal, will get the same job of rule-of-law enforcer that so antagonised Warsaw and Budapest. But she wants to depersonalise the issue and reduce the “fierceness” of discusssions.

She is also reaching out the parliament as a whole, promising to revamp the broken Spitzenkandidat system, backing the Macron-supported idea of “transnational lists” in elections – a prospect viewed with much unease in the smaller states – and promising to look at giving the parliament some right to initiate legislation.

MEPs have complained for years that the commission’s “sole right of initiative” has deprived them of an essential feature of a true parliament.

She promises much more intensive dialogue with MEPs, the co-legislators, and is said to admire Michel Barnier’s close relationship with the parliament which she sees as a model for future exchanges.

On priorities she has also been pressing the right buttons for MEPs: Climate change; migration reform, particularly the so-called Dublin regulation; the digital economy; a minimum wage; the rule of law; and gender balance. On Brexit she remains committed to not reopening the withdrawal agreement.

And it’s not enough to tick the boxes. On climate change there is a delicate political line to tread. An “equilibrium”, she is understood to call it, between the principle of extracting a price for CO2 through an emissions trading system that needs reform and ensuring a level playing field for industry and small to medium-sized enterprises. She also wants to avoid “carbon leakage” of jobs, compensating those most dependent on coal, like the Poles.

It’s not an easy balancing trick – the Greens have added her lack of climate ambition to their objections to the method of her selection as justifications for opposing her. The ECR appreciates her “softer” line on the rule-of-law confrontation, but is wavering. The hard left will vote against her with the hard-line populists.

A refusal by the parliament to back Von der Leyen would take the union into uncharted waters – especially given that other parts of the post’s package are difficult to unwind – and the difficulty of finding another candidate who could rally sufficient support from national leaders.

A delay would complicate the appointment and ratification of the new commission and exacerbate the crucial challenge of agreeing a new multiannual budget in time. Observers suspect, however that she will make it on Tuesday, albeit perhaps not with the 400 votes her supporters would like.