Ukraine wary of Trump entanglements as it prepares to host Pompeo 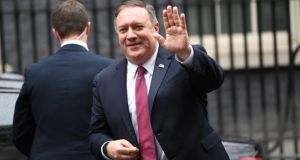 US secretary of state Mike Pompeo arrives at Downing Street ahead of a meeting with UK prime minister Boris Johnson in London on Thursday. Photograph: Neil Hall/EPA

Ukrainian leaders are due to meet US secretary of state Mike Pompeo on Friday for talks that will be overshadowed by the impeachment trial of president Donald Trump, who is accused of seeking Kiev’s help in efforts to discredit his political rival Joe Biden.

The US Senate hearings centre on claims that Mr Trump temporarily withheld almost $400 million (€362 million) in military aid from Ukraine last year to coerce its president Volodymyr Zelenskiy to launch a corruption investigation into Mr Biden and his son Hunter, who served on the board of Kiev-based gas firm Burisma.

Mr Pompeo was dragged deeper into the scandal last week, when a US journalist accused him of swearing at her and shouting “Do you think Americans care about Ukraine?” after she questioned him on the issue.

He is also under pressure to explain what, if anything, he and the state department did to help former US ambassador to Kiev Marie Yovanovitch, following the release of text messages that suggest supporters of Mr Trump may have put her under surveillance in Kiev before the White House abruptly recalled her last May.

Mr Zelenskiy will be anxious to avoid comment on the impeachment case, which centres on a phone call last July during which Mr Trump asked him to “do us a favour” and “look into” unsubstantiated claims about the Bidens and a conspiracy theory that Ukraine – not Russia – meddled in the 2016 US election.

The White House has repeatedly cited Mr Zelenskiy’s previous insistence that there was “no pressure” during the call, and there are concerns in Kiev that Mr Trump may expect him to repeat such denials during Mr Pompeo’s visit, as Ukraine seeks continued US backing in its 5½ year conflict with Russia.

The state department said Mr Pompeo would meet Mr Zelenskiy and his foreign and defence ministers “to highlight US support for Ukraine’s sovereignty and territorial integrity.”

He is also due to meet religious, civil society and business leaders and pay his respects to Ukrainian soldiers killed in fighting over the eastern Donbas region, which has claimed some 14,000 lives and displaced about 1.5 million people.

Mr Pompeo may face questions about Ms Yovanovitch amid investigations into whether Trump supporters had her spied upon in Kiev. Mr Trump criticised her in the July call with Mr Zelenskiy, and his personal lawyer Rudy Giuliani has said he wanted her “out of the way” for allegedly blocking efforts to investigate the Bidens.

Ukrainian prosecutor general Ruslan Ryaboshapka said on Thursday that Kiev was looking into the surveillance allegations and that US investigators had flown to the city to conduct their own inquiries.

“At the moment there is no joint investigative group between the US and Ukrainian sides . . . and I don’t think there will be one,” he added.

He also said that Ukraine had not received any official request from the US to look into Burisma, where Hunter Biden was on the board from 2014-19.

Earlier this month, Kiev asked the FBI to help investigate a suspected cyber-attack on Burisma and other Ukrainian firms by hackers linked to Russian military intelligence.