Bank keeps rates on hold at 0.75% on back of improved business sentiment 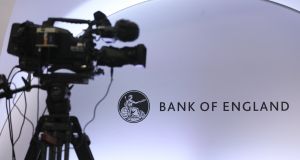 The bank estimated Britain’s economy would be able to grow at only an average rate of 1.1 per cent over the next three years without sparking damaging inflationary pressure. Photograph: Bloomberg

The Bank of England on Thursday voted to keep interest rates on hold at 0.75 per cent as its Monetary Policy Committee decided the improvement in business sentiment since the election made an immediate cut unnecessary.

But on the eve of Brexit, the bank dealt a blow to Boris Johnson’s new government, further downgrading its view of the underlying prospects for the economy to their lowest since the second World War.

The MPC estimated Britain’s economy would be able to grow at only an average rate of 1.1 per cent over the next three years without sparking damaging inflationary pressure, less than half chancellor Sajid Javid’s ambition of boosting the growth rate towards 2.8 per cent.

Longer term difficulties for the UK economy as it transitions away from the EU, however, did not dominate the committee’s immediate decision on interest rates. The MPC again voted 7 to 2 in favour of holding rates at 0.75 per cent which it expected would keep inflation rising gently up to its 2 per cent target within three years.

The majority thought a stabilisation in the global economy since December, a reduction in global trade tensions and better UK survey data of households and companies, “supported the forecast of a near-term recovery in growth”.

This view came despite the committee remaining uncertain about whether the economy would avoid recession in the months ahead. The BoE estimated growth would stagnate in the fourth quarter and that there was a 38 per cent chance the economy is currently in recession with output lower in the first quarter than a year earlier.

“The committee would monitor closely the extent to which these early indications of an improved outlook were sustained and followed through to the hard data on domestic activity in coming months,” the minutes of the MPC meeting said.

The pound climbed following the decision to hold interest rates, trading 0.4 per cent higher at $1.3080 against the dollar. UK government bonds fell, pushing the 10-year gilt yield 0.02 percentage point higher to 0.52 per cent.

Ahead of the decision, markets had been pricing in close to a 50 per cent chance of a cut, meaning many investors were positioned for lower rates. – Copyright The Financial Times Limited 2020

CNOOC will not exercise rights to buy Tullow stake in Uganda fields 08:38
Hong Kong stocks fall amid concerns over possible US sanctions 07:49
EasyJet, American Airlines to cut 30% of staff amid coronavirus disruption 07:31
Irish economy to contract by 12%, ESRI forecasts 06:39
ESRI warns of biggest slump ever, Brown Thomas’ plans and Michael O’Leary has a point 06:30

1 Ross O’Carroll Kelly column 'not racist towards English people'
2 Irish economy to contract by 12%, ESRI forecasts
3 What is in the EU’s €750bn recovery plan and how will it affect Ireland?
4 Brown Thomas and Arnotts shoppers will be able to book time slots for entry
5 Beware of the rush to get back to normal business amid Covid-19
6 EU needs to rebuild GDPR after only two years
7 Irish banks’ failure to innovate could leave them written off for good
8 Joint accounts: if one of us dies, can the other access the money?
9 Mortgage payment-break numbers rise to 78,000
10 O’Leary casts unwelcome light on a very Irish political compromise
Real news has value SUBSCRIBE