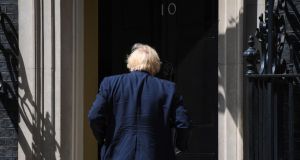 Three former prime ministers have condemned Boris Johnson’s decision to incorporate the Department for International Development into the Foreign Office, warning that it will diminish Britain’s standing in the world.

The new Foreign, Commonwealth and Development Office will be formed in autumn, subsuming the standalone international development department created by Labour in 1997. Mr Cameron, under whose premiership the UK first reached the United Nations target of spending 0.7 per cent of gross national income on development aid, welcomed Mr Johnson’s promise to keep to that target.

“But the decision to merge the departments is a mistake. More could and should be done to co-ordinate aid and foreign policy, including through the National Security Council, but the end of [the Department for International Development] will mean less expertise, less voice for development at the top table and ultimately less respect for the UK overseas,” he said.

Mr Brown said the government was abolishing one of Britain’s “greatest international assets”, and Mr Blair said he was “utterly dismayed” by the decision. He said Labour created the department to play a strong role in projecting British soft power and that it had done so to global acclaim.

“It is a leader in both programmes and thought in development, helping millions of the world’s most vulnerable to be relieved of poverty and killer diseases. The strategic aims of alignment with diplomacy and focus on new areas of strategic interest to Britain could be accomplished without its abolition. Wrong and regressive move,” he said.

Mr Johnson argued that merging the two departments, which has long been advocated on the right of the Conservative party, on the basis that distinctions between diplomacy and overseas development were artificial and outdated.

He said that although the Department for International Development outspent the Foreign Office by four to one, no single department was responsible for aligning their activities and ensuring that the aid budget was being spent in accordance with the UK’s foreign policy interests.

“For too long, frankly, UK overseas aid has been treated as some giant cashpoint in the sky that arrives without any reference to UK interest,” he said.

Labour leader Keir Starmer accused the prime minister of making the announcement in an attempt to distract attention from his government’s failures in the coronavirus crisis. He said abolishing the department would not help to restore the UK’s position on the world stage and asked how much the reorganisation would cost.

“Abolishing [the department] diminishes Britain’s place in the world. There is no rationale for making this statement today. The prime minister should stop these distractions and get on with the job of tackling the health and economic crisis we currently face,” he said.

Many countries with a commitment to development aid, including Ireland, Norway and Denmark, have incorporated their international development departments within their foreign ministries.