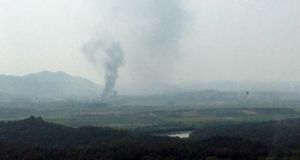 Smoke rises from the Korean liaison office at the Kaesong industrial complex on Tuesday. Photograph: Yonhap/AFP via Getty Images

North Korea has blown up the inter-Korean liaison office near the country’s border with South Korea, marking a sharp escalation in hostilities by Kim Jong-un towards Seoul.

South Korea’s defence ministry released footage of the facility being destroyed on Tuesday. A North Korean government statement carried by state media said the office was “completely destroyed” with a “terrific explosion”.

The office, which was established two years ago during a period of rapprochement, was located in the joint industrial complex of Kaesong, an area less than 10km from the demilitarised zone that divides the two countries. South Korean companies previously operated factories in the zone, employing labour from the North.

The office has been closed since January amid sweeping measures by North Korea to isolate itself from the coronavirus pandemic.

The explosion came just hours after North Korea signalled via state media that its military would potentially enter border areas that had been disarmed after a 2018 summit between Mr Kim and Moon Jae-in, the South Korean president.

Seoul said it would “respond strongly” to North Korean military provocations. The US military, which has about 28,500 troops stationed in South Korea, did not immediately respond to requests for comment.

Pyongyang’s decision to blow up the facility was the latest in a series of threats from the Kim regime. The increased hostility followed complaints by Kim Yo Jong, Mr Kim’s sister and a close adviser, over moves by defector and human rights groups to send anti-Kim material into the closed-off country.

On Saturday, she warned: “Before long, a tragic scene of the useless north-south joint liaison office completely collapsed would be seen,” according to a statement carried by state media.

North Korea last week cut its most important communication channels with South Korea’s military, diplomats and the presidential office. That prompted Seoul to crack down on efforts to send anti-North Korean material across the border in an attempt to improve relations.

The liaison office was established after the leaders of the two Koreas met at Panmunjom in April 2018 and agreed to work towards peaceful relations. This included the denuclearisation of the Korean peninsula and bringing an end to military hostilities.

Mr Moon has sought closer engagement with North Korea, including pushing for projects to help the economy. But he has not broken with the US-led international sanctions regime designed to curb Mr Kim’s nuclear ambitions.

Negotiations between Washington and Pyongyang over the nuclear weapons programme have stalled, despite three meetings over the past two years between Mr Kim and Donald Trump, the US president.

Many North Korea analysts believe Pyongyang’s resumption of hostilities is part of a broader strategy to put pressure on the Trump administration to ease crippling economic sanctions.

Van Jackson, a former Pentagon official now at Victoria University of Wellington, said the liaison office was blown up because “North Korea feels betrayed by Trump and still needs the sanctions relief it thinks it’s owed”.

Analysts also warned that Pyongyang has entered into a cycle in which it will seek to manufacture a crisis only to later step back after winning concessions from the international community.

“North Korea has started a provocation cycle with stages of escalation. It is unlikely to jump immediately to a long-range missile launch as that would prompt additional sanctions from the United States,” said Leif-Eric Easley, a North Korea expert at Ewha University in Seoul. – Copyright The Financial Times Limited 2020