Two men go on trial for politician’s murder in Germany 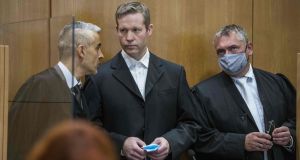 Stephan Ernst (centre), who is accused of murdering politician Walter Lübcke, with his lawyers in the court in Frankfurt. Photograph: Thomas Lohnes/pool/AFP via Getty Images

Two men have gone on trial in Germany accused of murdering a regional political leader last year, a killing that shocked the country and flagged the growing number of violent attacks against the country’s politicians.

Walter Lübcke, a 66-year-old regional council head in the central city of Kassel, was shot dead at close range while sitting on the terrace of his home on June 2nd.

Prosecutors say Stephan Ernst, the suspected gunman, is a neo-Nazi extremist motivated by “racism and xenophobia” who shot Lübcke in response to his pro-immigration stance during the 2015 refugee crisis.

According to the bill of indictment, Mr Ernst “crept up on his victim and shot him in head from a short distance with a Rossi revolver”.

The politician was found dead in a pool of his own blood at his home in Wolfhagen-Istha in the federal state of Hesse. He was the first politician in postwar Germany to be killed, apparently, by a right-wing extremist.

Wearing an oversized suit and a neutral expression, Stephan Ernst was brought into a high-security courtroom in Frankfurt just after 9am and placed in a plexiglass cell. Plans to read out the charges against him were delayed by motions from his legal team to dismiss the judge, including a claim not enough had been done to satisfy Covid-19 health concerns.

After his arrest, Ernst admitted to the murder but subsequently revoked his confession. He now claims an alleged accomplice, identified only as Markus H and accused of procuring the gun, got into an argument with the politician and shot him by mistake.

Stephan Ernst was arrested on the basis of DNA evidence found at the crime scene. Investigators later linked him to a 2015 town hall meeting during where Mr Lübcke said taking in refugees reflected Germany’s Christian values.

“Whoever does not support these values can leave this country any time, if he doesn’t agree,” said Mr Lübcke, a politician with chancellor Angela Merkel’s Christian Democratic Union (CDU). Mr Lübcke’s widow and two sons issued a statement as the trial began, insisting that “hatred and violence can have no place in our society”.

Queues formed from early morning outside the higher regional court complex in Frankfurt and more than 200 journalists were accredited to report on the proceedings. In the end just 19 journalists and the same number of members of the public were admitted, to preserve social distancing measures.

The months following the shooting saw a series of xenophobic attacks: a synagogue in the eastern city of Halle that left two dead and a shooting in a bar in Hanau, near Frankfurt, that claimed 10 lives.

In the year since the killing, police have questioned 40 people accused of hate speech in relation to the Lübcke case.

The killing has prompted a security detail boost for many leading German politicians.

German president Frank Walter Steinmeier has condemned the rising violence against politicians, in particular at regional and local level. Such public servants, he said, are the “foundation on which our democratic building rests” and must not be degraded to “doormats for the frustrated”.

Investigators hope the trial will shed light on shadowy far-right networks in Germany, which are increasingly active online since the 2015 refugee wave.

On the first anniversary of the Lübcke killing, federal interior minister Horst Seehofer described it as a “watershed in our German history and a warning to us all” to act more decisively against neo-Nazi networks.

“Far-right extremism,” he said, “is the greatest threat to our democratic state.”