Coronavirus: Lufthansa cancels all flights to China as four cases confirmed in Germany 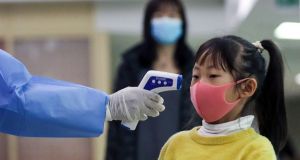 A Kenyan health worker screens a passenger wearing a face mask after they arrived at Jomo Kenyatta International Airport in Nairobi from China. Photograph: EPA

German carrier Lufthansa has cancelled all flights to China as health authorities confirmed the country’s first four cases of the coronavirus in Germany, all employees at a Bavarian car parts firm.

Federal health minister Jens Spahn has recommend “alert composure” as the best response to news of Europe’s first confirmed cases of person-to-person transmission of the virus.

After the first case on Tuesday evening, the number of people infected had jumped to four by Wednesday morning. All are employees at the Webasto firm in Starnberg, outside Munich. All had contact with a visiting Chinese colleague and the four are being held in quarantine. At least 40 more employees’ health is being monitored and their firm has closed until Sunday.

“It was to be expected that it would come to infections in Germany, because of contacts with travellers from China,” said Mr Spahn. Decisive now, he said, was to identify and isolate infected people quickly to prevent a further spread.

Germany’s federal health ministry has announced a series of precautions, operational from Wednesday. All airlines flying into Germany are required to register the health status of passengers after landing. In addition airlines have been asked to provide seating plans, to help contain any further outbreaks if required.

Travellers will be issued with forms, requiring them to detail their travel and whereabouts in the last 30 days.

Lufthansa has cancelled all flights to mainland China until March 1st and is bringing home all crew. Mr Spahn said he hoped to fly home German citizens stranded in Wuhan, capital of the province of Hubei and the Chinese epicentre of the virus.

The first German to fall ill is a 33-year-old man from the Landsberg region. He had close contact with a colleague from his firm’s Chinese operation visiting Bavaria for training.

Andreas Zapf, head of the Bavarian state office for health and food safety, said the Chinese woman began to feel sick on the flight home on January 23rd.

She sought medical attention and was confirmed to be carrying the virus that first emerged in Wuhan. The woman said she had visited her parents in the Wuhan region before the trip to Germany.

A spokeswoman for the Robert Koch Institute, Germany’s centre for disease prevention and control, said the Bavarian cases appeared to be the first instance of a “human-to-human transmission” outside Asia.

The four patients are being kept in an isolation ward at a Munich hospital and authorities say none have displayed any known symptoms.

In a statement, their employer Webasto said it had halted all business travel to and from China “for at least the next two weeks”.

Webasto is a family-owned firm and one of Germany’s major car parts firms, in particular engine heating system it supplies to many of the country’s automotive firms.

The virus has so far killed over 130 people and infected more than 6,000 people in China.

Cases have also been reported in a growing number of other countries, including the United States, France, Australia and Japan.