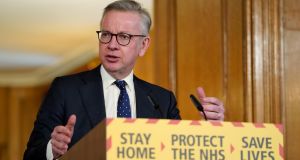 British cabinet office minister Michael Gove is self isolating as a member of his family is displaying Covid-19 symptoms, an ITV reporter said.

Mr Gove, one of the most senior members of prime minister Boris Johnson’s government, continues to work, ITV said.

Meanwhile, prime minister Boris Johnson remains in intensive care after he was hospitalised in London when his Covid-19 symptoms worsened.

Before news emerged that Mr Gove was self-isolating, the minister said on Tuesday that Mr Johnson has received “oxygen support” at St Thomas’ Hospital but had not been on a ventilator and is not currently on one. Mr Gove told LBC: “By being in intensive care if there is further support he needs it is there at hand. “But the Prime Minister has not been on a ventilator.”

Derek Hill, professor of medical imaging at University College London (UCL), said the prime minister could be given a breathing aid known as continuous positive airway pressure (CPAP), which bridges the gap between an oxygen mask and full ventilation.

But Prof Hill said many Covid-19 patients eventually “progress to invasive ventilation”. This is for people whose illness is so severe they are struggling or unable to breathe for themselves. A mechanical ventilator either does all the breathing for the patient, or assists the patient’s own breathing.

The UK secretary of state Dominic Raab has taken over Mr Johnson’s duties while the prime minister remains unwell in hospital.

British health secretary recently returned to work following a period of self-isolation after he tested positive for Covid-19.