US president psychologically incapable of responding to complex and uncertain virus 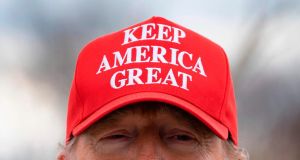 The cruel insults to Joe Biden’s mental acuity are flying fast and ferocious on Fox News. How can we trust the nuclear codes to someone so incoherent, Fox chatterers cry, who doesn’t always seem to know what day it is or what office he’s running for?

That’s no surprise. The House that Roger Ailes Built is – as Barack Obama mastermind David Plouffe boldly pointed out the other day on “Fox & Friends” – in the tank for President Donald Trump. Plouffe described the network as Trump’s Westworld, a fantasy realm where the president can be the man he wants to be rather than the man he is.

In “the year of the drunken uncle”, as the Spectator calls it, 73-year-old Trump has belittled 77-year-old Biden as “not playing with a full deck” and predicted that, if Biden wins, his staff will “put him into a home” and he’ll be there watching television while “superleft, radical crazies” run the White House.

At a Fox town hall Thursday night in Scranton, Pennsylvania, Biden’s hometown, the president made fun of Biden’s slip about “Super Thursday” and his recent observation that he was running for the Senate. “There’s something going on there,” Trump said as his supporters laughed.

On Wednesday night Laura Ingraham said on her programme that Jill Biden “looks like she is directing a patient in the memory-care unit half the time” and showed a graphic of Biden as the dead guy propped up in the film Weekend at Bernie’s.

Republicans have made something of a speciality of challenging opponents’ cognitive capacity. George W Bush’s forces fought John McCain in the Republican primary by whispering that the war hero had snakes in his head from his years of torture. Lee Atwater infamously said a Democrat running for Congress in 1980, who had received electroshock therapy in his youth for depression, had been “hooked up to jumper cables”.

Even Ronald Reagan got in on the act when he called Michael Dukakis, who was running against his vice-president, “an invalid”, echoing baseless rumours spread by followers of Lyndon LaRouche that Dukakis had had psychiatric treatment.

Democrats can resort to this sort of sniping, too. Many Trump critics in 2016 and in the year after his election pushed the idea that his father had suffered from Alzheimer’s and now Trump was losing it and that his vocabulary was eroding. And it has become common among his attackers to say the president is deranged, suffering from malignant narcissism.

In his new book, Front Row at the Trump Show, Jonathan Karl, chief White House correspondent of ABC News, reports the surprising fact that one of those calls on Trump derangement came from inside the White House. Karl recounts that when Mick Mulvaney became acting chief of staff, he took senior White House staffers to Camp David for a weekend retreat. He recommended they read a 2011 book, A First-Rate Madness: Uncovering the Links Between Leadership and Mental Illness, by Nassir Ghaemi, director of the mood disorders programme at Tufts Medical Center.

“This book argues that in at least one vitally important circumstance insanity produces good results and sanity is a problem,” Ghaemi writes in his introduction. “In times of crisis, we are better off being led by mentally ill leaders than by mentally normal ones.”

Abraham Lincoln and Winston Churchill had bouts with depression, and Gen William Sherman suffered from paranoid delusions during the American civil war. But less mercurial leaders such as Neville Chamberlain and Gen George McClellan fared badly. As Karl wrote, “The new acting chief of staff seemed to be saying President Trump was mentally ill – and that this was a good thing. The corollary to that theory: don’t try to control the man in the Oval Office. What you think is madness is actually genius.”

In his book, Ghaemi said of people with mental disorder mania, “Decisions seem easy; no guilt, no doubt, just do it. The trouble is not in starting things, but in finishing them; with so much to do and little time, it’s easy to get distracted ... affairs are common; divorce is the norm ... Mania is like a galloping horse ... In Freudian terms, one might say that mania enhances the id, for better or worse.”

When Karl reached out to Ghaemi to ask how Trump would fit into his thesis, Ghaemi replied “perfectly”, noting that the president has “mild manic symptoms all the time”. Ghaemi also concedes in his book that extreme forms of mania can be highly disabling and dangerous.

The virus will be in every community and needs truth, honesty and intelligence – all absent from unstable Trump

Trump is continuing his Panglossian handling of the coronavirus. “The tests are beautiful!” he said as he toured the Centers for Disease Control and Prevention on Friday evening, after a kerfuffle over delays in testing. “The tests are all perfect, like the letter was perfect, the transcription was perfect,” he added, referring to his communication with the president of Ukraine. “This is the highest-level test anywhere.”

“I like this stuff. I really get it,” he said, adding that maybe he should have become a scientist like his uncle, the “supergenius”, instead of running for president. Meanwhile, the stock market is still freaking out, and financial angst is spreading from boardrooms to kitchen tables. We can vividly see in this crisis how close to the surface Trump’s id is and how easily he cleaves to delusions. He personalises everything so much that when things go bad, he can only see it as an attack on him by the forces out to get him.

He seems psychologically incapable of dealing with a virus that is complex and uncertain. The virus will be in every community and needs truth, honesty and intelligence – all absent from unstable Trump, who at his core is a frightened boy and pretender.