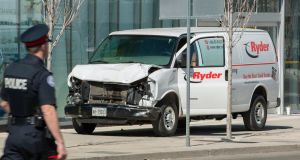 A rented van pictured on a footpath in Toronto after it was driven off the street into pedestrians, killing ten and injuring many others. Photograph: Warren Toda/EPA

A Canadian police officer is being hailed for the restraint and professionalism he showed in arresting the suspect in the Toronto van attack without firing a single shot.

On Monday afternoon, a white van ploughed into pedestrian s along one of Toronto’s busiest streets, killing 10 people and injuring more than a dozen others in what one official described as “pure carnage.”

Soon after, the alleged driver of the van was arrested by a lone police officer in an incident lasting less than a minute and caught on video by bystanders.

“Get down,” the officer shouts.

“Kill me,” the man tells the police officer. “I have a gun in my pocket.”

The officer’s voice remains calm as he again orders the man to get down, warning that he will shoot if the man does not cooperate. “Shoot me in the head,” the suspect replies.

Weapon drawn, the officer advances towards the suspect. The suspect steps backwards, dropping what he was holding and raising his hands in the air. The officer proceeds to single-handedly arrest the suspect.

The arrest came as police forces across North America – including in Toronto – have been criticised for using excessive force to subdue mentally ill or unarmed suspects.

Police identified Alek Minassian, a 25-year-old man from the nearby town of Richmond Hill, as the man who had been arrested. He appeared in court on Tuesday.

Officials refused to comment on a motive, but said the suspect did not represent a threat to national security.

Video of the dramatic confrontation between the suspect and the police officer was hailed on social media, where the officer – who has yet to be identified – was praised.

Many said he deserved a medal. A columnist for Maclean’s magazine contrasted the officer’s calm demeanor with the chaos and horror that had unfolded minutes earlier. “I am paid to explain things and sound confident doing so,” he wrote. “But I honestly don’t know what to make of this terrifying, remarkable moment.”

Mark Saunders, the city’s police chief, credited the force’s high-calibre of training. “The officer did a fantastic job with respect to utilising his ability of understanding the circumstance and environment and having a peaceful resolution at the end of the day,” he said.

Mike McCormack, the president of the Toronto Police Association, said the officer – who has been with the force for more than seven years – would have been justified if he had decided to fire at the suspect. “But this officer looked at what was going on and determined he could handle it the way that he did,” he told the Globe and Mail. “People are right: this guy is a hero.”

He had spoken to the officer, who was left shaken. “He said, ‘Mike, I just did my job. What I did was no big deal. But look at these poor people,’” said Mr McCormack.

“That’s what everyone’s thinking: great, he did his job and arrested this guy and may have prevented further deaths,” Mr McCormack added. “But he’s more concerned with 10 people being dead, 15 people being injured, why now and what’s happening in this city.” – Guardian