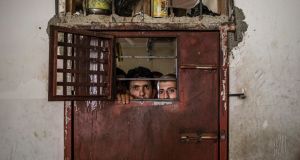 Suspected Islamic State members imprisoned just south of Mosul, in Iraq, in July 2017: Isis reveals it has taken into account the defeat of the “caliphate”. Photograph: Ivor Prickett/New York Times

Islamic State spokesman Abu Hassan al-Muhajir has called upon the group’s fighters to focus on the Arab world rather than mount operations further afield. In an hour-long recorded message carried by Islamic State (Isis) chat rooms, he urged members to target Arab leaders.

He said there was “no difference” between the rulers of Saudi Arabia, Egypt, and Palestine “and their American Crusader allies, or the Russians or the Europeans”. He held that Arabs should be fought with greater vigour because they are “Arabs and are more fierce and vicious against Islam”. By “Islam”, he meant Sunni Islamic State’s skewed version of the faith, which is rejected by the overwhelming majority of Sunnis.

Commenting on Iraq’s parliamentary election, which is set to begin on May 12th, Muhajir warned, “The polling centres and those inside are targets of our swords.”

For Isis, the poll is anathema since the result could put in power one of three Iran-backed Shia fundamentalist figures: incumbent prime minister Haidar al-Abadi, former premier Nouri al-Maliki or militia leader Hadi al-Amiri. Maliki and Amiri are particularly hated by Iraqi Sunnis who accuse the men of marginalising, persecuting and sectarian cleansing their community.

Muhajir’s intervention marks a departure from the line adopted in June 2017 when he issued his previous directive. This promoted violence against Europe and the US and led to multiple attacks by Isis agents or sympathisers in Germany, France, Britain and the US.

By narrowing its focus to Arab leaders, Isis reveals it has taken into account the defeat of the “caliphate” and loss of territory in Iraq, where it held 40 per cent of the country, and Syria, where it had conquered 30 per cent. Isis has been reduced to several besieged pockets of land in Iraq and Syria.

Determined to retain a presence and revive, Isis commanders may believe restricting operations to the Arab world could reduce western intelligence and security force pressures on affiliates in Europe and elsewhere. They may be ordered to become dormant until the time is ripe to strike targets outside the Arab world.

Isis considers Arab leaders “apostates”, the term used to condemn Sunnis, Shias, Christians, Jews and members of other faiths who do not accept the group’s puritan religious ideology and prescribed behaviour.

Branding those who dissent from Isis’s ideology “apostates”, criminals and sinners harks back to hardline Muslim scholars and ultra-orthodox Saudi Wahhabis. While in power Isis clerics and military commanders frequently ordered those who refused to adopt their ideology to be executed, often by decapitation.

Muslims who reject Isis dictates label group members taqfiris and accuse them of using brutal repression and violence to achieve their political objectives.

The first group dispatched to Syria by al-Qaeda in Iraq was Jabhat al-Nusra, headed by Abu Mohamed al-Golani, a Syrian whose approach to religion was less puritanical than that of Isis. The Jabhat launched its campaign against the Syrian government by bombing police and security targets in Damascus and Aleppo in late 2011 and early 2012.

Islamic State in Iraq and Syria was formed by Abu Bakr al-Baghdadi, a veteran Iraqi figure who had spent time in US prisons. When Isis entered Syria in the spring of 2013, Baghdadi expected Golani to merge his group with Isis and accept Baghdadi as supreme commander. Golani refused and the two groups became fierce rivals.

Pakistan-based al-Qaeda central’s leader Ayman Zawahiri expelled Isis from the parent organisation due to the extremism of its ideology, actions of its fighters, and conflict with the Jabhat.

Following Isis’s defeat, it could overtake Isis as the main al-Qaeda offshoot in Syria and, perhaps, the region.