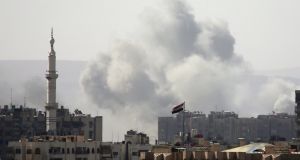 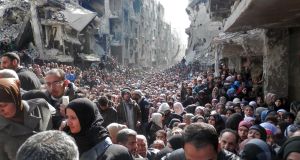 A file photograph of people waiting in line for food at the Yarmouk refugee camp in Damascus, taken on January 31st, 2014. Photograph: United Nation Relief and Works Agency via Getty Images

The Syrian army has bombarded jihadis and other rebels in the last area outside government control near Damascus, as President Bashar al-Assad moved to strengthen his position around the capital after the defeat of rebels in eastern Ghouta earlier this month.

The bombing came as inspectors from the Organisation for the Prohibition of Chemical Weapons (OPCW) remained stranded in Damascus almost two weeks after a chemical attack on a town in Ghouta that precipitated the rebel collapse.

Air strikes and shelling hit the Yarmouk Palestinian refugee camp and al-Hajar al-Aswad area, part of a small enclave divided between warring jihadis and other rebels south of the capital. Live state television footage of the area showed a plume of smoke billowing across one district as guns boomed in the distance.

The US, British and French missile strikes designed to punish Mr Assad for the use of chemical weapons have done nothing to slow the advance of his forces, now in their strongest position since the early months of the seven-year war.

Efforts to investigate the chemical attack in Douma on April 7th have been repeatedly delayed , leading to suspicions that the regime and its ally Russia were stalling the OPCW team into order to tamper with evidence at the site.

Russia’s official position, citing the tests done by its own military, is that the attack never took place, and that no one died as a result. Moscow has said that armed rebels forced local residents to take part in staged filming of the alleged attack’s aftermath, including by faking symptoms of chemical poisoning.

However, if the inspectors find evidence of chemical weapons, officials are primed to deflect blame from Assad and try to pin the attack on rebels.

Russian state media is pushing two lines: that they have spoken to witnesses who deny any attack took place, and that they have found canisters filled with chlorine in Douma, which were used for rebel attacks later blamed on the regime.

On Wednesday, Russian state TV broadcast interviews with a Syrian boy it said was featured in a hospital video taken by the Syria Civil Defence, a volunteer organisation known as the White Helmets.

The boy, whose name is Hassan Diab, said he was in a bomb shelter with his mother and felt fine, when people on the street told everyone to go to the hospital. There, they were filmed being doused in water and given other simulated medical treatment. A state television reporter, citing Diab’s father, said the boy was given rice and figs for his part in the video.

The boy’s father, who was not present at the time of the attack, said he later found his son at the hospital. He said that no chemical attack took place in Douma that night.

That contradicts accounts by victims given to a number of western outlets, which put the death toll from the attack at more than 40 people, many trapped in the basement of a three-storey house. CBS News, reporting from Douma, published a photograph of the missile said by locals to have carried the chemical payload lodged in the building’s facade.

Doctors responsible for treating patients in the hours after the April 7 th attack said they faced government intimidation to stay quiet. The World Health Organisation said that 500 people sought medical treatment with “signs and symptoms consistent with exposure to toxic chemicals”.

“It’s absolute misinformation and a cover-up,” said Hamish de Bretton-Gordon, an adviser to the Union of Medical Care and Relief Organisations, of the Russian denials. “But I know that a number of samples have gotten out of Syria and have been tested, and I’m hoping they will confirm what happened.”

In another Russian state TV programme broadcast one day before Diab’s interview, Russian soldiers on the ground in Douma said they found underground rebel labs for producing chemical weapons, including chlorine. A Russian official showed state journalists chemical equipment and materials, which are needed to produce sulfur and nitrogen mustard gas.

Key among the findings was a chemical cylinder, which a Russian official said was filled with chlorine gas, and which was nearly identical to the ones used in the April 7th video that Russia said were fake.

“Thanks to these instructions, using this equipment, the fighters made the gas they later used in their provocations,” a state TV journalist reported. Later in the report, he referred to the cylinder: “The rebels pumped chlorine into similar vessels, took it to the city, and then presented it all as an attack by the Syrian army.”

Russia said that the Khan Shaykhun nerve gas attack, which killed at least 87 people in 2017, occurred because a government air strike had hit a rebel depot for chemical munitions. The Assad government denied at first that any incident had taken place.

One month later, Russia vetoed the renewal of the inquiry, calling it biased. The inquiry had identified multiple instances when the Syrian government stood behind chemical gas attacks in the country, as well as attacks carried out by the Islamic State terror group.

With the OPCW fact-finding mission mandated only confirming the use of chemical weapons or otherwise, and not to assign blame, Mr de Bretton-Gordon said Russia’s response was predictable.

“The US, the British and the French will have a UN resolution to sanction the Syrians and no doubt the Russians will veto it,” he said. “We’ll be back in our cycle.” – Guardian