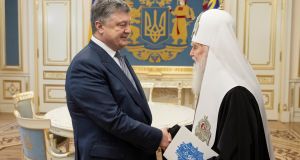 Ukrainian president Petro Poroshenko has called for an end to Moscow’s rule over his country’s Orthodox church, saying it would inspire the nation and help it reclaim Crimea and the war-ravaged Donbas region from Russia and its proxies.

In Kiev’s latest bid to break centuries of Russian domination, Mr Poroshenko, parliament and some church leaders in Ukraine have asked the spiritual head of the world’s Orthodox Christians to grant independence to the Ukrainian church, over which the Moscow Patriarchate claims authority.

Longstanding divisions between rival Orthodox churches in Ukraine have deepened since it ousted pro-Kremlin leaders in a 2014 revolution and Russia responded by annexing Crimea and fomenting a separatist war in eastern provinces.

The bid to secure independence, or autocephaly, for the Ukrainian Orthodox Church “will cause a huge upsurge in the national spirit”, Mr Poroshenko said.

Mr Poroshenko insisted that recognition of an independent Ukrainian Orthodox church would help “eliminate internal strife and conflicts within the state”.

“Having united, we will liberate the Ukrainian land faster. Both Crimea and the Donbas,” he declared.

After a meeting in Istanbul earlier this month with Ecumenical Patriarch Bartholomew, Mr Poroshenko secured the overwhelming support of parliament in Kiev to request his formal recognition of an independent national church.

The move is also backed by the heads of the Kiev Patriarchate and a smaller, existing autocephalous Ukrainian Orthodox church, which are not recognised by the Russian Orthodox Church or the Moscow Patriarchate in Ukraine.

The Holy and Sacred Synod chaired by Patriarch Bartholomew said on Sunday that it had received Ukraine’s request and would “closely communicate and co-ordinate with its sister Orthodox Churches concerning this matter”.

Ukraine’s petition raises questions of Orthodox history going back to 1686, when church authority over Kiev was transferred from Constantinople to Moscow – a move Mr Poroshenko now wants to reverse.

The Russian Orthodox Church has drawn close to the Kremlin under President Vladimir Putin, and in Ukraine clerics of the Moscow Patriarchate have been accused of backing Russian-led militia in Donbas and the annexation of Crimea.

In 2012, the then head of the Russian Orthodox Church described Mr Putin’s rule as “a miracle of God”; two years later, by contrast, the leader of the Kiev Patriarchate called him “a new Cain” who had “fallen under the actions of Satan”.

The Kremlin has denounced Mr Poroshenko’s church initiative, and critics see it as a bid to boost his popularity before elections next year.