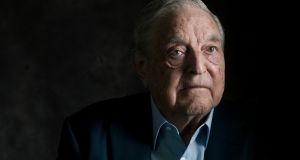 George Soros, the billionaire investor and Democratic donor, has been accused by Republicans, without evidence, of funding a caravan of Central American migrants headed for the US border. Photograph: Damon Winter/The New York Times

In recent weeks, a similar allegation against Soros has emerged in the US: internet conspiracy theorists and some Republican politicians have accused him, without evidence, of funding a caravan of Central American migrants headed for the US border.

Asked this week whether Soros was financing the caravan, US president Donald Trump said: “I don’t know who, but I wouldn’t be surprised. A lot of people say yes.”

Soros denies any connection. The frequency with which such unfounded allegations have been aired in the US highlights how divisive the issue of illegal immigration – a favourite campaign theme of Trump – has become.

But it also shows how anti-Semitism and conspiracy theories have spread from the fringes to the political mainstream, in both Europe and the US.

The clash between Soros and Hungary’s prime minister Viktor Orban escalated in 2015, as a great wave of Middle Eastern migrants travelled to central Europe that year.

“His name is perhaps the strongest example of those who support anything that weakens nation states,” Orban said of the Budapest-born Soros in a radio interview at the time. “These activists who support immigrants inadvertently become part of this international human-smuggling network.”

Soros has denied any such plan but argued in a 2016 column that the EU could reduce illegal migration by strengthening its external borders and committing to accept 300,000 refugees annually.

Laura Silber, spokeswoman for the billionaire’s Open Society Foundation, said that, while conspiracies about Soros had existed on the fringes due to his vast wealth, the Hungarian government campaign had taken them to new levels.

“We have seen the borders of what is acceptable move to the centre,” she said, recalling a campaign in which the Holocaust survivor’s face was printed on the floors of public buses so that passengers would tread on it, which she compared to Nazi-era propaganda.

But Gyorgy Schopflin, an MEP from Hungary’s ruling Fidesz party, said Soros’s Jewish background had nothing to do with the controversy. “The government understood that the Soros-funded NGOs were busy doing everything they could to make Hungary a migrant country,” he said.

The dispute has intensified. The university Soros founded in Budapest in 1991 is set to shift most of its courses to Vienna after complaining of being “forced out” of Hungary because of demands made by the government.

The Trump administration has given some backing to Soros’s central European University in its battle with Orban. But the president and many of his supporters have also demonised Soros.

The billionaire first emerged as a major player in the US political scene in 2004 after he spent $27 million on a failed bid to stop George W Bush’s re-election. He spent similar amounts on Democratic campaigns, including Hillary Clinton’s, in 2016. In the current elections, he has already spent more than $10 million.

Soros is by now a well-established focus of Republican attacks. A campaign advertisement at the end of Trump’s successful 2016 presidential campaign targeted him along with former US Federal Reserve chair Janet Yellen and Goldman Sachs’s Lloyd Blankfein, who are also Jewish, and suggested that the billionaire was among those who controlled “the levers of power in Washington”.

“I have become a bit more concerned about my image, because it is disturbing to have those lies out there,” Soros told the New York Times magazine earlier this year.

But the midterm elections campaign has continued the theme. Soros’s image appeared last month in an campaign advertisement in Minnesota, sitting behind towering piles of cash. “Billionaire George Soros bankrolls the resistance,” the narrator intoned in the ad, one of several Soros-related spots released in the state by the National Republican Congressional Committee.

Matt Gaetz, a Republican congressman from Florida, also falsely suggested on Twitter last month that Soros was funding the migrant caravan from Central America – an accusation repeated by conservative commentators on Fox News.

At the same time, the billionaire has been subjected to the threat of violence, as the conspiracy theories have swirled around him.

Soros was the first of a dozen prominent liberals to be targeted by pipe bombs which authorities say were mailed by César Sayoc, a Florida conspiracy theorist who mentioned the billionaire repeatedly on Twitter.

Last week, Kevin McCarthy, the Republican number two in the House of Representatives, posted a tweet accusing Soros and two other billionaires of Jewish descent – Michael Bloomberg and Tom Steyer – of attempting to buy the election. McCarthy’s office, which has condemned the recent violence, denied that the advertisement was meant to be a dog whistle, but removed the tweet after the pipe bombs.

“Soros has become the House of Rothschild of the 21st century,” said Deborah Lipstadt, a professor of Holocaust history at Emory University and the author of a forthcoming book on modern-day anti-Semitism. “No one [explicitly] says Soros is a Jew, but there are groups on the right for whom these [symbols] are a wink-wink, nod-nod dog whistle.”

Robert Goldberg, a professor at the University of Utah and author of a book about the US conspiracy culture, said while it was not new for a wealthy Jewish banker to be a scapegoat for fringe extremists, conspiracy theories were now being disseminated faster in the age of social media.

“I think this has really reached the mainstream,” he said. “Conspiracy theories have become normal.” – Copyright The Financial Times Limited 2018