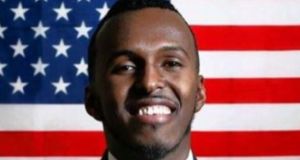 Somali-American Ismail Mohamed from Columbus, Ohio, is out to connect the Democratic Party with Ohio’s Somali community.

Ismail Mohamed’s life could have turned out very differently. Born in 1992, when civil war raged across Somalia, his family and he were forced to live in a refugee camp before securing visas to immigrate to the US in 1997.

Today, Mohamed is a budding politician who’s caught the eye of the Ohio Democratic Party establishment, surprising party leaders and not least himself. The 26-year-old lawyer lost the Democrats’ nomination for Ohio’s 25th house district to the incumbent by just 658 votes in May.

A year ago, party representatives wouldn’t return his phone calls. Now, a consultant on immigrant affairs to the Democratic Party, Mohamed operates as a link between Ohio’s growing immigrant community and a party that hopes to deal president Donald Trump and the Republican Party a resounding blow in Tuesday’s crucial midterms.

“Politics is in every facet of our society now,” he says. “Before, you had to seek it out. Now, it’s everywhere. Seeing that our community is growing, I felt we needed a voice.”

Columbus, the state capital, is home to about 50,000 people of Somali descent as well as large and relatively affluent Arab, Nepali and Indian communities. “I think people understand now that there are consequences to elections, to not voting; our community can tip the balance,” says Mohamed, who is heavily involved in social and cultural events within Columbus’ Somali community. “We’re seeing a lot of outreach from Democratic politicians. They realise we’re a voting block.”

This election season in the US, immigration and immigrants’ rights have become major, divisive points of contention. And with more than 500,000 immigrants (half are naturalised citizens) now living in Ohio, their voting preferences in a state where Trump won 52 per cent of the vote two years ago, is increasingly coveted.

The majority of Somali-Americans and others of an immigrant background vote Democrat but are by no means uniform in their political loyalties. “For high-income immigrants, tax-saving policies are important,” says Bassam Kret, an internal physician from New Albany, a suburb northeast of Columbus, who moved to the US from Syria in 1991. “I’m leaning Democrat more than Republican [in the midterms] because of the social support systems they back. But at the same time, I go Republican in terms of religious issues.”

About 42 per cent of adult immigrants in Ohio have a college degree or higher level of education, according to the American Immigration Council. The national average is 33 per cent. And with about 113,000 immigrants having moved to Ohio over the past six years, their votes on Tuesday may have major consequences for the direction of Ohio and American politics.

In Minnesota, a hijab-wearing Somali-American, Ilhan Omar, is expected to be elected to the US Congress and would become the joint-first Muslim woman to do so, reflecting immigrants’ growing influence in the political sphere. “We have to return to the realisation that we are a nation of immigrants,” says Mohamed. “We can be that voice that says ‘Hey, we are here and can do phenomenal things.’ We can fight back against the racism and hatred.”

But as pictures of thousands of migrants heading to the US border through Mexico are beamed into Ohioan homes on nightly news reports, the political hay being made off the perceived threats immigrants pose persists. Nor has Columbus been completely spared the actions of extremists that’s spiked up elsewhere in America. In November 2016, a refugee of Somali heritage inspired by Isis drove a car into a crowd of pedestrians at Ohio State University campus, injuring and stabbing 11 people before he was shot dead by police. In February of the same year, an illegal immigrant from Guinea attacked diners at a restaurant in northeast Columbus with a machete. Such events serve as fuel to conservatives who want to keep immigrants out.

One such politician is the Republican candidate for governor and current Ohio attorney general, Mike DeWine, who supported Trump’s travel ban on immigrants from five Muslim-majority countries, including Somalia, Syria, Yemen, Libya and Iran. Trump is due in Cleveland, Ohio, for a rally on Monday.

Currently, at the state level, all major executive positions, including governor and attorney general, are held by Republicans. But with Ohio’s 16 seats in the US House of Representatives as well as a host of executive roles all up for election on Tuesday, the stakes are high.

DeWine, who last week was offered a “total endorsement” by Trump, holds a .02 per cent lead over the Democratic candidate for governor, Richard Cordray, in what’s become a dead heat. Cordray, a bookish former Ohio attorney general, has drawn support from pro-immigrant Democratic heavyweights such as Elizabeth Warren.

Some centrist voters believe controlled immigration is the best option for the country. “On one hand,” says Kret, “I want immigration [to continue] because the country was built on this, but I’m against opening the borders to everyone – it should be about meeting the skills that are needed here.”