The poor pay as Brazil veers between drought and deluge 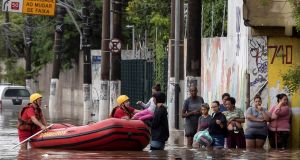 The prettiest of all the nicknames for the city of São Paulo is Terra da Garoa: the land of drizzle. But the way things are going, this will soon have to be changed to the land of torrential downpours. Or maybe drought.

It is summer in Brazil’s southeast, and after the deaths of dozens of people in neighbouring states on Monday it was the turn of São Paulo to feel the full force of the season’s rains. The heavens opened on Sunday evening and by the time most people woke up on Monday morning an almighty deluge had fallen on the country’s biggest city.

Such was the volume of water, its two principle rivers burst their banks, houses and businesses were flooded, large parts of the transport network were paralysed and authorities were forced to plead with people not to leave their homes. South America’s financial capital experienced a day of chaos.

Given São Paulo sits on the Tropic of Capricorn, heavy tropical rainfall is not unusual. Summer traditionally consists of hot, sunny days finished off with a heavy thunderstorm in late afternoon. But Monday morning’s rain was something different. In just 24 hours, 66 per cent of the expected rainfall for the whole month of February was dumped on the city. It was the second biggest volume to fall in February in 77 years, according to Brazil’s meteorological service in São Paulo, INMET.

Data compiled by INMET shows that the number of downpours above 80mm in 24 hours – the type that bring chaos – is increasing.

Four of the six heaviest downpours in February occurred since the millennium. Six of the worst nine for any month since records began in 1943 took place after 2004. With each passing decade these meteorological “events” are becoming more common.

The city’s climate is becoming increasingly erratic. It is common to hear paulistanos lament they no longer have proper winters like before. The city’s garoa is becoming less frequent as the climate becomes hotter and less humid. While Brazil’s southeast experienced catastrophic rains this year, as recently as 2014 São Paulo suffered its worst ever drought, which came perilously close to leaving the city without water.

Brazilian scientists studying climate change warn that these extremes of drought and flooding are the new normal. Part of the reason for such changes is due to the heat a metropolitan region of more than 20 million people generates. All that human infrastructure and activity in what was once rainforest has pushed up temperatures, disrupting climate patterns.

But the city’s changing weather has also been blamed on human activity elsewhere. The disruption to rain patterns in Brazil’s southeast responsible for events such as the drought in 2014 has been linked by researchers to deforestation in the Amazon rainforest.

Despite the challenges all this poses for Brazil’s citizens, they can expect little help from President Jair Bolsonaro in facing them. He has flirted with pulling Brazil out of the Paris climate accord, is suspicious of science and dismisses concerns about climate change as a “commercial game” designed to hold back Brazil’s potential.

His environment minister Ricardo Salles questions the role of human activity in global warming while overseeing the dismantling of his ministry’s ability to enforce the environmental protection laws that were so flagrantly violated last year when large tracts of the Amazon when up in flames.

Whatever about the global impact of such thinking, it risks reinforcing the inequality already evident in how climate disruption affects Brazilians. In São Paulo the rain fell on rich and poor alike.

But when the city floods, well-off neighbourhoods usually emerge relatively unscathed. It is poorer ones with insufficient drainage capacity, fewer green areas to absorb rainfall and often built on land developers have snubbed on sound environmental grounds that get hammered.

In the wake of this week’s rains, it emerged that over the years various city administrations had failed to spend the hundreds of millions of euro earmarked for drainage projects that could have better prepared these poorer neighbourhoods for the floodwaters.

This lack of urgency has many causes rooted in the failures of Brazilian public administration, but undoubtedly reflects the social profile of those most affected. It is a cruel national complacency that reflects that of the rich world in facing up to the gathering climate crisis, to which poorer nations are far more vulnerable.