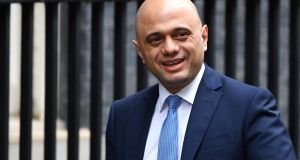 Sajid Javid has abruptly quit as UK chancellor after a brutal power struggle with prime minister Boris Johnson and his top adviser Dominic Cummings over how to manage the country’s finances in the aftermath of Brexit.

His sudden departure, only eight months into the job, disrupts plans for the upcoming budget, which is scheduled for March 11th. He was immediately replaced by Rishi Sunak, a close ally of the prime minister who accepted his plans to take control of the chancellor’s office.

Mr Javid met the prime minister for an hour on Thursday morning and refused his demand to sack his team of advisers, according to Whitehall officials. The chancellor’s team had been engaged in a briefing war with Downing Street in recent weeks over who will be responsible for writing the budget.

Mr Javid, who has never presented a budget, is the first chancellor to quit over a disagreement with Downing Street since Nigel Lawson in 1989.

Mr Sunak, the 39-year-old treasury chief secretary who stood in for Mr Johnson in television debates during the general election campaign, has accepted that the budget will be drafted by advisers from both the prime minister’s team and the treasury.

Mr Johnson had intended for his first cabinet reshuffle to be “moderate”, according to Downing Street insiders, but his decision to confront Mr Javid has backfired.

The prime minister earlier sacked Julian Smith as Northern Ireland Secretary and Andrea Leadsom as business secretary in the first moves of his reshuffle, which is expected to promote a significant number of women in government.

Alok Sharma, former the international development secretary, has replaced Mr Leadsom at the department for business. He has also been given responsibility for the upcoming COP26 international climate conference in Glasgow.

Mr Smith, who was widely praised for restoring the devolved government at Stormont last month, was criticised by Downing Street insiders who were unhappy about aspects of the power-sharing agreement that would investigate murders during the Troubles.

Taoiseach Leo Varadkar paid warm tribute to Mr Smith’s role in the North, calling him “one of Britain’s finest politicians of our time”.

He tweeted: “In 8 months as Secretary of State, Julian you helped to restore powersharing in Stormont, secured an agreement with us to avoid a hard border, plus marriage equality. You are one of Britain’s finest politicians of our time. Thank you”. – Copyright The Financial Times Limited 2020