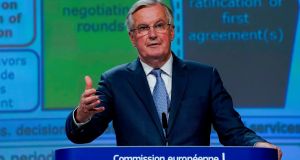 The UK will have to remain automatically in lockstep with any future changes to EU state aid and competition rules if it wants full and free access to EU markets in future, the EU’s draft negotiating mandate for talks says.

In other areas, as with the environment, social and labour standards, the UK would have to commit to maintaining current standards and both sides could agree to future changes if they thought them necessary.

The commission published the mandate in Brussels on Monday – it now has to be approved by member states. Chief negotiator Michel Barnier reiterated his insistence that the UK’s degree of divergence from a trade level playing field – and the price it would pay for that divergence – was entirely a matter of its “choice”. There were “no surprises” in the draft mandate’s provisions on the issue, he told journalists.

He also said the sub-agreement on fisheries would be “inextricably” linked to agreement on the broader deal. The talks over mutual access to both fisheries and markets are set to be the most difficult part of the discussions.

The draft mandate also makes it clear that failure by the UK to implement the provisions of the withdrawal agreement and its protocols, including that on Ireland, would have serious consequences for the future relationship talks. “The negotiations of the envisaged partnership should be premised,” the draft mandate says, “on the effective implementation of the withdrawal agreement and of its three protocols.”

Irish diplomatic sources welcomed the broad thrust of the document and particularly its language on implementation of the withdrawal agreement and of the Belfast Agreement.

Barnier was asked if that meant a failure to introduce – or to plan to introduce – controls on goods crossing the Irish Sea, which UK prime minister Boris Johnson has claimed are unnecessary, would result in the breakdown of the partnership talks. He reiterated only that the controls were a clear requirement of the withdrawal agreement. He had suggested last week in Belfast a special joint task force to implement such measures, and he would report regularly on compliance.

Importantly, the document’s limited aspiration to a free trade agreement with the UK confirms the permanence of the Northern Ireland protocol’s provisions. A free trade agreement with, it is hoped, no tariffs or quotas, would not remove the necessity for customs controls and checks between the UK and the EU. The protocol is no longer just an “insurance policy”.

Expected unanimous approval by the Council of Ministers of the draft should see talks opening in the first week of March, with the hope to finish by October to allow time for ratification.

The commission proposes to establish up to 12 separate strands of talks, all moving forward together. The draft is broadly divided in three parts: economic relations and the aspiration to a free trade agreement without tariffs and quotas, intensive justice, security and foreign co-operation, and a section on governance.

The last of these insists on a role throughout the implementation of any agreement for the European Court of Justice, a red rag to the British.

The result of the negotiations would be one overarching treaty that would take the form of a new “association agreement” between the EU and the UK.

“The envisaged partnership should include an ambitious, wide-ranging and balanced economic partnership,” the mandate says. “This partnership should be comprehensive, encompassing a free trade agreement as well as wider sectoral co-operation where it is in the Union interest.”

In financial services the document talks of using union rules for measuring “equivalence” of regulatory regimes rather than regulatory alignment.

Barnier insisted that the agreement must provide that any failure to respect the deal must allow for an “autonomous and speedy response” by the aggrieved party and for countermeasures.

It would require the UK to continue to adhere to the European Convention on Human Rights, which previous Tory administrations had spoken of repudiating, and “provide for automatic termination of the law enforcement co-operation and judicial co-operation in criminal matters if the United Kingdom” were to do so.

On corporate tax the two sides would commit “to curb harmful tax measures, taking into account the G20-OECD BEPS Action Plan”. That’s a pledge that Ireland would have found difficult a few months ago.