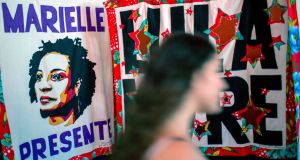 A poster depicting slain city councillor of the Municipal Chamber of Rio de Janeiro for the Socialism and Liberty Party Marielle Franco: Adriano Nóbrega was a suspect in her murder. Photograph: Daniel Ramalho/AFP

The killing by police of a fugitive linked to the family of Brazil’s president Jair Bolsonaro and who was also a suspect in the 2018 murder of Rio city councilwoman Marielle Franco has been meet with widespread suspicion.

Police say Adriano Nóbrega died in a shoot-out when they raided his hideout in a town in the northeastern state of Bahia. His wife claims her husband was unarmed at the time though police displayed what they said were weapons recovered at the property.

An ex-captain in Rio de Janeiro’s elite Bope police unit, Nóbrega was believed to be one of the leaders of Rio’s notorious Office of Crime criminal militia composed of former and serving police officers.

As well has being a suspect in the murder of Franco and her driver, Nóbrega was also under investigation for his involvement in an alleged kick-back scheme operated out of the office of Bolsonaro’s son Flávio when he was a Rio state deputy.

Nóbrega’s lawyer Paulo Emílio Catta Preta said that, in a phone call last Tuesday, his client told him: “No one is coming to arrest me. They want to kill me. If they arrest me they’ll kill me in prison.”

“I think he already suspected he would be dead in a burning of archives,” Mr Catta Preta told the O Globo newspaper, using the Brazilian term for when criminal conspirators kill a colleague to prevent them revealing evidence or turning state’s witness.

After Nóbrega’s death was announced, Franco’s widow Monica Benicio asked on Twitter: “Who benefits from the death of ex-Bope Adriano Nóbrega?” Two former police officers have been arrested for Franco’s murder but the investigation into who ordered the killing appears stalled.

Flávio Bolsonaro, now a federal senator, employed Nóbrega’s wife and mother in his office when he was still a state deputy. In December public prosecutors said they believed bank accounts controlled by Nóbrega were used to launder money taken from the salaries of officials employed by Flávio.

Ciro Gomes, who Jair Bolsonaro defeated in the 2018 presidential election, demanded justice minister Sergio Moro “fully clarify” the “exceedingly strange chain of facts” linking the Bolsonaros to Rio’s criminal militias and Franco’s murder. Otherwise, he said, Moro would be “transformed into an accomplice”.