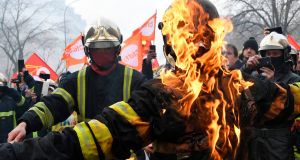 A firefighter sets alight another one as they protest in Paris, France. Photograph: Bertrand Guay/AFP via Getty Images

French police clashed on Tuesday with firefighters protesting in Paris against their working conditions and demanding more pay.

Thousands of firefighters attended the protest in the French capital, asking for an increase of their hazard bonus, which has not changed since 1990.

Police fired tear gas and hit some protesters with batons.

In October, firefighters also protested in Paris, calling for better pay, guarantees of their pension benefits and greater respect for their profession.