Parasite, a dark social satire from South Korea, won the Oscar for best picture, making history as the first film in a language other than English to claim the movie industry's highest honour. Video: Reuters 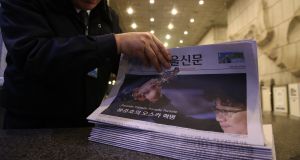 Bong Joon-ho’s Parasite is a damning commentary on South Korea’s gaping wealth gap, but on Monday the country came together to celebrate the film’s historic showing at the Oscars, culminating in an Academy Award for best picture.

The film also won Oscars for best director, best screenplay and best international feature, adding to its successes at the Cannes Film Festival last year and the Baftas earlier this month.

But it was the moment that Parasite was awarded best picture – a first for any non-English language film in the Oscars’ 92-year-history – that sparked outpourings of joy in Bong’s native country.

Some TV networks broke into their regular programming to bring news of the award, which many pundits had predicted would go to 1917. During a live broadcast of the ceremony on South Korean TV, the presenter had to apologise to viewers for screaming at the moment Parasite was named best picture.

It was unlikely, though, that many South Koreans – consumed in recent weeks by news of the coronavirus outbreak – would be able to join Bong in celebrating with a drink, as news of his feats reached his compatriots at around lunchtime on Monday.

The Oscars marked an incredible turnaround for Bong who, just a few years ago, was on a secret blacklist, compiled during the administration of the country’s disgraced conservative president, Park Geun-hye, of thousands of South Korean artists and writers who espoused “left-wing views”.

In all, 9,473 artists were denied state funding over their public support for other political parties and criticism of Ms Park’s poor handling of the 2014 Sewol ferry tragedy, in which more than 300 people, most of them high school students, drowned.

On Monday, social media users came together to praise Bong, with many of the plaudits reserved for his humility and success in taking South Korea – and Asian – cinema to a global audience in a year dominated by the country’s pop culture phenomenon, the K-pop band BTS.

“Just like BTS had a popular appeal by casting the problems the youth go through everywhere in the world, Parasite gained global understanding by demonstrating the issue of the gap between the rich and poor,” pop culture critic Kim Hern-sik said.

In a Twitter post, Eugene Gu said that as an Asian-American he was “overjoyed” to see Parasite win best picture, but wondered why none of the actors in the film had even been nominated. “It’s like being seen and erased simultaneously,” Gu wrote.

The Canadian-Korean actor Sandra Oh tweeted her congratulations, adding: “So so proud to be Korean” alongside an emoji of the South Korean national flag.

The US ambassador to Seoul, Harry Harris, tweeted, “we are doing a watch party at the embassy eating jjapaguri”, referring to the noodle dish the wealthy family eats in the movie.

The American actor and filmmaker Eugene Lee Yang said: “Language is a core expression of identity. Subtitles do not divide or disqualify – they’re gateways into incredible stories you might have otherwise never known. Tonight I heard the language of my family on the Oscars stage. I can’t wait to hear many, many more.”

Hashtags #Parasite and #DirectorBongJoonho were topped trends on Twitter South Korea, while the film’s name was the most searched on the local Naver web portal after the wins.

The Korea society, a non-profit that promotes greater understanding between people in Korea and the US, said Parasite had “shattered” more than nine decades of Oscar history on Sunday night.

Many South Koreans described Parasite’s Oscar successes as a victory for the entire country, not just for its film industry, with some saying it was one of the few brights spots in a month dominated by the coronavirus’s spread to South Korea.

But some in South Korea, particularly in the independent film sector, voiced concern about the film’s links to the chaebol – a reference to the powerful family-run conglomerates that drove modern South Korea’s economic development.

“On one hand, I feel happy about its win but at the same time, the film was produced by a chaebol company,” Ahn Hae-ryong, a documentary maker, told the Guardian.

“Together, they own 99 per cent of all the screens and monopolise them for blockbusters. It is a film about the gap between the rich and the poor, but it is in fact feeding off the suffering of the poor to make the fat cats even fatter. The Oscar wins will do nothing for indie filmmakers.”

Others said the film’s success was cause for celebration, despite its chaebol connections. Jeong Min-ah, a South Korean film critic, was particularly impressed by Miky Lee’s acceptance speech after Parasite was named best picture. “She thanked everyone who has supported Korean cinema. She is aware of the power of audiences,” Jeong said.

Kim Si-moo, head of the South Korean branch of the International Federation of Film Critics, said the awards had recognised the power of storytelling, regardless of the language.

“The Oscars have opted for change at last. Hollywood’s technical advancement has reached its peak, as shown with other nominees,” Kim said. “But the Academy Association members have gone for a unique story that is also universal.” – Guardian