Donald Trump fires two officials who testified against him

‘The truth has cost Lt Col Alexander Vindman his job, his career, and his privacy’ 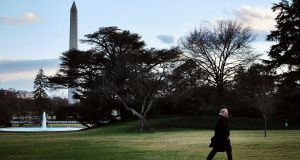 US president Donald Trump has ousted two government officials, Alexander Vindman and Gordon Sondland, who testified against him during his impeachment hearings.

The president took retribution just two days after his acquittal by the Senate.

Lt Col Alexander Vindman, the decorated soldier and national security aide who played a central role in the Democrats’ impeachment case, was escorted out of the White House complex.

His lawyer said this was in retaliation for “telling the truth”.

“The truth has cost Lt Col Alexander Vindman his job, his career, and his privacy,” David Pressman said in a statement.

Mr Vindman’s twin brother, Lt Col Yevgeny Vindman, was also asked to leave his job as a White House lawyer on Friday, the Army said in a statement.

Both men were reassigned to other positions in the Army.

Next came word that Gordon Sondland, the US ambassador to the European Union, was also out.

“I was advised today that the President intends to recall me effective immediately as United States ambassador to the European Union,” Mr Sondland said in a statement.

White House press secretary Stephanie Grisham said on Thursday that Mr Trump was glad the impeachment trial was over and “maybe people should pay for that”.

House speaker Nancy Pelosi said in a statement that Mr Vindman’s ousting was “a clear and brazen act of retaliation that showcases the president’s fear of the truth.

“The president’s vindictiveness is precisely what led Republican Senators to be accomplices to his cover-up.”

Senate Republicans, who just two days before acquitted Mr Trump of charges he abused his office, were silent on Friday evening.

Many of them had reacted with indignation during the Senate trial when Democrat Adam Schiff, the lead prosecutor, suggested Mr Trump would be out for revenge against the people who crossed him during the impeachment proceedings.

Since his acquittal, Mr Trump has held nothing back in lashing out at his critics, including Senator Mitt Romney of Utah, the only Republican to vote against him.

On Friday, he also took after Senator Joe Manchin, a moderate Democrat from West Virginia whom Trump had hoped would vote with the Republicans for his acquittal but who ended up voting to convict.

Mr Trump tweeted that he was “very surprised & disappointed” with Mr Manchin’s votes, claiming no president had done more for his state. He added that Mr Manchin was “just a puppet” for the Democratic leaders in the House and Senate.

It was Alexander Vindman who first told the House that in America “right matters” — a phrase repeated in the impeachment trial by Mr Schiff.

Mr Sondland was also a crucial witness in the House impeachment inquiry, telling investigators that “Everyone was in the loop” on Mr Trump’s desire to press Ukraine for politically charged investigations. – PA