US president Donald Trump celebrates his acquittal on impeachment charges with an event at the White House. Video: Reuters 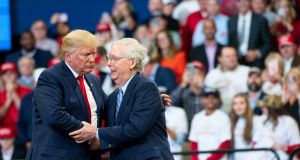 Donald Trump ‘has forged one of the most cynical and darkly productive alliances of all time’ with Mitch McConnell, sending his personal approval rating to an all-time high’. File photograph: Doug Mills/The New York Times

Democrats: the only thing you have to fear is Trump himself. You should be quaking. Our unhinged monarch had a very good week and your party had a very bad week – and that’s no BS.

A lot of you told me, with expletives, that while you were watching President Donald Trump’s carnival-barking this past week, you were thinking, “We’re going to freaking lose.” Trump hollowed out the hallowed, Apprenticing one of Washington’s most august traditions Tuesday night, showing in the State of the Union how he has figured out how to use the levers of the presidency to amplify his flair for the dramatic.

There has always been political theatre; now there’s Trump political theatre, as he perfects the black art of turning Democrats into mincemeat. What could be more flamboyantly offensive than the anti-bullying advocate, Melania, hanging a Medal of Freedom around the neck of one of the biggest bullies and hate preachers of all time, Rush Limbaugh? Talk about the bully pulpit.

The president even finally managed to send his classy nemesis, Nancy Pelosi, over the edge, as she became so agitated that she was driven to Trumpian tactics to rebut his lies. The acquittal put an exclamation point on two facts: Trump has subsumed the Republican Party, except for the sole Republican lawmaker whose base would not kill him if he voted to throw the president out of office. And he has forged one of the most cynical and darkly productive alliances of all time with the poker-faced Mitch McConnell, sending his personal approval rating to an all-time high.

Iowa was a master class in Democratic dysfunction. The disarray kicked off the Saturday before the vote when the all-important Des Moines Register poll crashed and burned. After that, campaign staffers on the ground began spinning, pushing their own narratives based on internal polls, and the press corps became a dog chasing its own tail.

On the night of the vote, I went to a high school on the edge of Des Moines to watch Iowans caucus. The caucuses have always been screwy under the rubric of quaint, with people offering chocolates for votes and doing coin tosses to make final decisions. But after I watched a kerfuffle, where a woman in a pajama outfit threw a fit when her vote somehow got moved from Biden to Buttigieg, things seemed sketchier than ever.

That was just the start of Iowa’s auto-da-fé. Candidates jumped on planes to get out of dodgy Dodge, leaving lower-level staffers and the press corps in a cocktail party of confusion at the lobby bar at the Des Moines Marriott. As one campaign staffer told New York magazine’s Olivia Nuzzi as he disappeared into the freezing cold Iowa night, the only thing left was to get soused and give himself over to concupiscence.

As the Republicans stuck together, ruled by fear and self-interest, the Democrats shattered apart

By the time I got to New Hampshire, the Democratic hysteria was rising and a faltering Joe Biden disappeared in a crisis cloud while internecine class war was intensifying. Pete Buttigieg was predeclaring victory, spurring Bernie Sanders supporters to dub him “Mayor Cheat” on Twitter. Sanders spoke Friday morning, tying Buttigieg to Wall Street and urging Democrats to decide if they were on the side of the working class or greed, “where billionaires control not only our economy but our political life.” #PetesBillionaires began trending on Twitter.

James Carville, en route to New Hampshire with his Mardi Gras beads to campaign for Michael Bennet, went on viral rants about being “scared to death” for his party as it lurched toward the far left. “Let’s get relevant here, people, for sure,” he said on MSNBC, adding, “Do we want to be an ideological cult?”

As the Republicans stuck together, ruled by fear and self-interest, the Democrats shattered apart. “Donald Trump is narrowcasting to African Americans and Latinos with his Super Bowl ad and at the State of the Union, and the economy’s doing well, and meanwhile we’re fiddling around with a socialist and Encyclopedia Brown,” moaned one top Democrat on the Hill.

Democrats from Congress to Los Angeles began whispering hopefully about Michael Bloomberg. “There seems to be a groundswell of support, mostly based on the fact that he’ll spend whatever it takes and fight just as dirty as Trump – with more resources,” said David Israel, a writer in Hollywood. Just as when he made his very imperfect call to the Ukrainian president the day after Robert Mueller testified, Trump began acting out right after his acquittal. He launched a revenge mission, accusing Pelosi of a Xerox felony. He said ominously about the Pelosi rip heard around the world: “First of all, it’s an official document. You’re not allowed. It’s illegal what she did. She broke the law.”

Gordon Sondland, the bumbling ambassador to the European Union who tried to help Trump seal his dirty deal but gave oomph to the quid-pro-quo argument, was given the boot. Lt Col Alexander Vindman, the national security official who testified against Trump in the impeachment hearings, and his twin brother were perp-walked out of the White House complex Friday. (They needed to make sure they had their man.)

“The most powerful man in the world, buoyed by the silent, the pliable and the complicit, has decided to exact revenge,” said David Pressman, Vindman’s lawyer. Democrats should be scared to death watching the president play to thuggish type, re-enacting the chilling final payback scenes of The Godfather, when Michael Corleone took out all his enemies. It’s not business. It’s strictly personal. – The New York Times