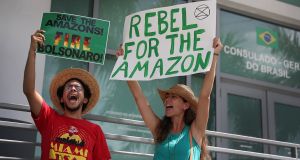 Angel Montalvo and Emily Bench protest for the protection of the Amazon rainforest in front of the Brazilian consulate in Coral Gables, Florida. Photograph: Joe Raedle/Getty

Protesters have laid siege to Brazilian embassies around the world as international outrage over Jair Bolsonaro’s failure to protect the Amazon intensified and supporters maligned critics of the Brazilian president as leftist conspirators.

Hundreds of demonstrators gathered outside Brazil’s embassy in central London on Friday with placards reading: “The planet deserves better” and “Our house is on fire”.

“Bolsonaro wants to destroy the forest . . . and we do not want this,” one indigenous leader from Brazil told the crowd.

There were also rallies outside Brazil’s embassies in Mexico City and Paris, where demonstrators reportedly carried banners reading: “Fora Bolsonaro!” or “Bolsonaro, out!”

Protesters also surrounded the Brazilian consulate in Geneva while further marches were planned in cities including Adelaide, Lisbon, Stockholm, Boston and Florida.

Brazil’s far-right president has rejected the international outcry over the fires raging in the Amazon and his stance on the environment.

Mr Bolsonaro on Thursday painted the barrage of criticism as part of a foreign conspiracy that might eventually be used to justify a foreign “intervention” in the Amazon.

“This happens all over the world, it’s not just in Brazil,” he said of the fires decimating the world’s largest tropical rainforest.

Mr Bolsonaro’s politician son, Eduardo, claimed criticism of his father was part of an international intrigue designed to damage his government. “The GLOBAL left has come together in a clear attack against president Jair Bolsonaro, ” he tweeted.

Rômulo Batista, a Greenpeace campaigner in the Amazon, said such claims – and Mr Bolsonaro’s baseless insinuation that NGOs were behind the fires – were merely an attempt to deflect from Mr Bolsonaro’s own responsibility for the environment calamity. “He is trying to hide behind a smoke screen,” Mr Batista said.

In Brazil, demonstrators were preparing to mobilise for a weekend of protests in cities including Rio de Janeiro, Salvador, Curitiba, Recife and the Amazon city of Manaus.

“Almost everyone I know will go,” said Frederico Svoboda (18), a history student from the Federal University of Rio de Janeiro.

“I believe that if there is not international pressure to force the government to deal with the fires and guarantee the protection of biodiversity and indigenous peoples, there could be climate disasters in Brazil and maybe South America. ”

People around the world should “pressure the Brazilian government to act”, Mr Svoboda added.

Anna Mello, a 24-year-old biology student, said she would march in the northeastern city of Recife.

“For me this is surreal, I can’t believe it is happening. It is absurd that . . . people can support this as if it were totally normal rather than a crime and something that might affect the whole of humanity.”

Writing in the O Globo newspaper, columnist Bernando Mello Franco said that, thanks to Mr Bolsonaro, “Brazil is on track to go back to being seen as an environmental pariah.”

Stung by the global outcry over the deforestation and wildfires in the Amazon rainforest, Brazil has launched a diplomatic offensive to persuade the international community of its environmental credentials.

Mr Bolsonaro’s administration has distributed a 12-page circular to its foreign embassies, outlining data and statistics that diplomats are meant to cite to defend the government’s position on the crisis. The circular, seen by Reuters, attempts to address 59 areas where Brazil has received criticism, by citing various policies and data.

The document attempts to rebut criticism of Brazil’s environmental record, but ignores some of Mr Bolsonaro’s more controversial policies. It states, for example, that deforestation peaked in the mid-1990s and was reduced by 72 per cent between 2004 and 2018. It neglects to mention that deforestation has been rising steadily again since 2012, due partially to the struggling Brazilian economy and budget cuts that resulted in less environmental enforcement.

This year, preliminary data suggests that deforestation in Brazil’s Amazon has surged 67 per cent through to July compared to the same period last year. The number of fires has surged by 83 per cent this year. – Guardian/Reuters