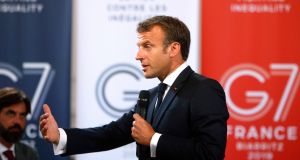 French president Emmanuel Macron delivers a speech on environment and social equality to business leaders in Paris, on the eve of the G7 summit. Photograph: Michel Spingler/EPA

French president Emmanuel Macron wants the three-day G7 summit that he will host in Biarritz from Saturday to “lay the foundations of a new democratic and economic order”.

The G7 comprise Canada, France, Germany, Italy, Japan, the UK and US.

The French president acknowledges that a single summit cannot reinvent the world, but he wants to “refind” what he calls the “life force” of the annual meetings established by then president Valéry Giscard d’Estaing to address the 1970s energy crisis.

Macron outlined his vision of the world and the G7’s capacity to change it in a 2½-hour meeting with journalists this week.

He said the world is going through “a very profound crisis of democracies” sparked by the above-mentioned fears, combined with inequalities and a crisis of capitalism, in which workers can no longer earn a decent living.

These crises have fostered “illiberal democacies” and “a fascination for authoritarian regimes”, including in Europe. Illiberal democrats choose isolationism and “brutality, whether it be military, geopolitical or in trade”, Macron said.

The post second World War multilateral system was threatened, “sometimes by guarantors of international order. This is part of US strategy,” Macron said.

Western powers ruled the world since the 18th century: first France, then Britain, and finally the US. “This western hegemony has been compromised, sometimes by westerners themselves, their errors . . . their incapacity to reform capitalism and the emergence of new powers,” Macron said.

Macron called on France and European powers “to defend and reinvent contemporary multilateralism, not to give in to the savageness of the contemporary world . . . This is what I would like to reinscribe at the heart of the G7.”

Like Charles de Gaulle in the 1960s, Macron envisages a unique role for France. “We can have friends and allies, but that doesn’t mean our friends’ enemies are our enemies . . . This makes of us a power of mediation. In a world where the greatest risk is a new, bipolar conflict between the US and China, where the centre of gravity has shifted towards Asia, the risk for Europe is effacement . . . If Europe is weak and divided, it will have to choose between the US and China.”

Macron called the G7 “a working laboratory” in the quest for a new humanism “where man is at the heart of the project, where technology and scientific progress are always at the service of man”.

Breaking with tradition, the summit will produce no pre-negotiated final statement. “Nobody reads communiques,” Macron said, provoking laughter. “Leaders spent all night agreeing on” a communique at the last G7 summit, in Quebec in June 2018, “one minute after the press conference, it was disavowed by the US president.”

Macron’s wish to transform the international order is likely to be overtaken by reality. His clash with the far-right president of Brazil, Jair Bolsonaro, is a case in point.

Macron wants the fires ravaging the Amazon rainforest to figure on the G7 agenda. Bolsonaro accused him of neo-colonialism. A two-day Twitter battle culminated on Friday with Macron calling Bolsonaro a liar and announcing that France would oppose the Mercosur trade agreement, which the EU signed in June, after 20 years of negotiations with Argentina, Brazil, Paraguay and Uruguay.

Security is a concern. France has deployed 13,200 policemen to ensure that anti-capitalists, ecologists, gilets jaunes and other protesters encamped across the Spanish border do not disrupt proceedings.

Macron will open the summit at 11am on Saturday. He will hold a head-to-head with German chancellor Angela Merkel after lunch, followed by a broader meeting of European members of the G7, including British prime minister Boris Johnson. Brexit is certain to come up.

Sunday morning will be devoted to security and the international economy. Macron said crises with Iran, Libya, Russia, Syria, Ukraine and Yemen would be discussed.

Threats of a global recession provoked by a trade war between the US and China will be paramount in the economic discussion. Christine Lagarde, the outgoing head of the International Monetary Fund who has been appointed to head the European Central Bank, said this summer that higher tariffs between the US and China could decrease global GDP by half a percentage point next year.

“The US cannot make trade wars on everyone,” Macron said. “A clarification with China is in all our interest.”

If leaders want to stimulate long-term economic growth, Macron said, “We must reinvest in innovation, education and health. That will foster wellbeing, create jobs and growth potential . . . If we want our capitalism to be sustainable, it must be just.”

In an issue of particular concern to Ireland, Macron singled out non-payment of tax by internet giants as uniquely unfair. He and Donald Trump have exchanged barbs via Twitter regarding the new French law which will impose a 3 per cent tax on internet companies with substantial sales in France.

The US treasury secretary Steven Mnuchin signed up to a G7 finance ministers’ agreement last month to “tax digital activity creating value with or without a physical presence in the country concerned”. If G7 leaders agree on the text at Biarritz, it would open the way to a global accord at the Organisation for Economic Co-operation and Development. Some doubt Trump will accept it.

The G7 will shift into multilateral mode from lunchtime on Sunday. Macron will welcome the heads of the IMF, OECD, World Bank, International Labour Organisation and UN. The working lunch will be devoted to “co-ordination of international organisations in the struggle against inequality”.

Macron will then greet the presidents of five African countries and two pan-African bodies, for a working session on partnership with Africa.

On Sunday evening, the summit will be enlarged to include the heads of state and government of Australia, Chile, India and Spain.

Final sessions will be held on Monday, on climate, biodiversity and the oceans, followed by digital transformation. The summit is scheduled to end with final press conferences, starting at 3pm.