US withdrawal of backing for insurgents may bolster links with Moscow 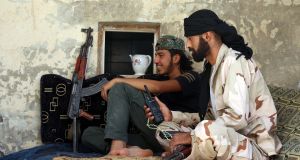 A Free Syrian Army fighter holds a walkie-talkie as he sits with a fellow member in al-Manshiyeh neighbourhood in Deraa, Syria. Photograph: Alaa Al-Faqir/Reuters

The Trump administration’s decision to cancel CIA support for insurgents seeking to topple Syria’s president, Bashar al-Assad, is unlikely to make much of an impact on the country’s battlefields, but could foster co-operation between Washington and Moscow in efforts to end the war.

The $500 million CIA programme, launched in 2012 by the Obama administration, aimed at recruiting, training and arming over three years 5,000 “moderate” fighters attached to the Free Syrian Army, a loose coalition of armed groups established by Turkey in 2011 to topple the Russian-supported Syrian government.

The effort failed. When in September 2015, the first 54 fighters were deployed, they were either killed or went missing. A second group of 75 surrendered to the al-Qaeda-linked Jabhat al-Nusra, which seized their weapons and vehicles.

Subsequently, US-backed “moderates” were replaced by extremists who co-operated with the al-Qaeda and Islamic State terror groups. The Syrian army’s expulsion of rebels and jihadis from eastern Aleppo finished off remnants of the US-backed factions. The CIA programme’s demise was long overdue.

Ending it is likely to have boosted President Donald Trump’s standing with his Russian counterpart, Vladimir Putin, who calls for expanding Russian-US co-operation in Syria. They have already established ceasefire zones across Syria to halt fighting between insurgents and government forces.

The latest is a ceasefire in southern Syria where the US military has been involved in training and equipping the Southern Front coalition of 54 rebel factions – ranging from secularists to moderate fundamentalists – which have been battling both jihadis and the government. Moscow is relieved that the US is now focusing on the campaign to root out Islamic State in both Iraq and Syria, rather than regime change in Damascus.

During 2016, the US found a worthy ally in the Kurdish People’s Protection Units, which merged with Arab-armed factions to form the Syrian Democratic Forces. By July 2017 more than 8,500 fighters had been trained by US Central Command and its coalition partners with the objective of crushing Islamic State.

The Democratic Forces has been given the task of liberating Raqqa, Islamic State’s de facto capital located in northern Syria, an effort Russia applauds.

The focus by the US and its partners on the battle against Islamic State is a boon to Russia, which is determined to prevent the ousting of Assad and to forge a peace agreement for Syria. Moscow has pioneered the creation of the ceasefire zones and regional ceasefires, and has championed negotiations between Damascus and its opponents.

This has increased pressure on armed factions to take part in talks with the government at Astana in Kazakhstan. These talks, expected to resume next month, are designed to prepare the way for the political opposition and government to reach accommodations on key issues when they meet in Geneva in September.

Whether progress is made or not could depend on Trump using his influence with Saudi Arabia, sponsor of the opposition High Negotiations Committee, to drop its demand for the early removal of Assad, a red line for Damascus.