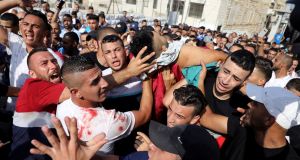 Mourners react as they carry the body of Palestinian Mohammad Abu Ghannam during his funeral in the East Jerusalem neighbourhood of A-Tur on Friday. Photograph: Ammar Awad/Reuters

At least three Palestinians were killed and some 200 injured in clashes on Friday as Palestinians protested against the installation of metal detectors at the entrances to a highly sensitive holy site.

The security measures at the shrine, which houses the al-Aqsa mosque and is known to Muslims as Haram al-Sharif, the Noble Sanctuary, and to Jews as the Temple Mount, were introduced after three Arab Israelis shot dead two Israeli police officers at the site last Friday. The three were then killed by police.

The restricted access was condemned by the Palestinians as an Israeli attempt to alter the status quo, which guarantees Muslims access to the site.

Two of the Palestinians killed on Friday died in clashes in east Jerusalem. The third was killed in the West Bank village of Abu Dis, close to Jerusalem, as Palestinian groups declared a “day of rage” to protest the new Israeli security measures.

The Friday clashes erupted after Israel refused to back down in the face of protests and remove the metal detectors. Ahead of the midday Friday prayers, Israel had beefed up security in Jerusalem and five extra infantry battalions were drafted to the West Bank. Access to the Old City was restricted to women and male worshippers over 50.

The confrontations began after the Friday prayers, which thousands of Palestinians performed in the streets, rather than in the al-Aqsa mosque, to protest against Israel’s decision.

“We will continue to pray outside the Al-Aqsa mosque as long as the metal detectors are at the gates,” said the Grand Mufti of Jerusalem, Mohammed Hussein.

Palestinian president Mahmoud Abbas asked the US to “intervene urgently” and compel Israel to remove the metal detectors.

Mr Abbas discussed the crisis in Jerusalem by phone with US president Donald Trump’s son-in-law and top adviser, Jared Kushner, warning that the situation was “extremely dangerous and may get out of control.”

The compound, which also houses the golden-roofed Dome of the Rock, is considered the third holiest site in Islam and the holiest site in Judaism. It is revered by Jews as the location of two biblical temples and many religious Jews will not visit the site for fear of stepping on holy ground.

After Israel captured the Old City of Jerusalem during the 1967 Six-Day War it allowed the Wakf, the Islamic Trust, to continue administering the site, although Israel maintained overall security control. The flashpoint site is often described as the most contentious piece of real estate in the world and Israel knows that any changes to the day-to-day arrangements covering access and worship may have repercussions throughout the entire Islamic world.

“This mentality of control, exclusion and exclusivity, attempting to change the status quo and impose its own control under the pretext of security on the Islamic holy sites and all of Palestinian Jerusalem is what enflames the situation. They are playing with fire,” she said.

The foreign ministers of Jordan and United Arab Emirates urged Israel to respect the status quo and called on the international community to engage in efforts to resolve the crisis.

As tension built, the Israeli cabinet met into the night on Thursday but decided to leave the metal detectors in place, despite recommendations to remove them by the Israel Security Agency (Shin Bet), and other security organisations.

“Israel is committed to preserving the status quo at the Temple Mount and the freedom of access to the holy places,” Israeli officials said in a statement. Israeli officials also stressed that the metal detectors were no different from those installed for Jewish worshippers at the Western Wall, for Muslims making the pilgrimage to Mecca and in airports worldwide.