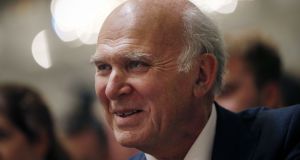 Veteran politician Vince Cable was elected unopposed to lead the UK’s pro-European Liberal Democrats on Thursday, promising to restore the party’s influence and use it to argue for a softer exit from the EU.

Cable, who served as business secretary from 2010 to 2015 in a coalition of the Liberal Democrats and the Conservatives, said before his appointment that he believed Brexit might never happen because it was too divisive and too difficult to deliver .

The 74-year-old economist was the only candidate in a leadership contest triggered when Tim Farron stepped down as head of the party after last month’s general election.

“As the only party committed to staying in the single market and customs union, the Liberal Democrats are alone in fighting to protect our economy,” he said.

The Liberal Democrats have campaigned for a second referendum on leaving the EU, to be held at the end of the Brexit negotiations. That position has been rejected by both British prime minister Theresa May and the opposition Labour party.

The party is Britain’s fourth-largest, with 12 members in the 650-seat parliament. It was almost wiped out in a 2015 election, and only enjoyed a small rebound in June’s vote, when the Conservatives lost their parliamentary majority.

“We have a government that can’t govern and an opposition that can’t oppose,” Mr Cable said. “Labour and the Conservatives have formed a grand coalition of chaos, driving through a hard Brexit which would deliver a massive blow to living standards.”

Mr Cable has also warned that Britain is heading towards a new financial crisis, likely to be triggered by rising interest rates, which could prompt a surge in support for anti-Brexit parties.